As bushfire conditions eased in Victoria on Sunday, Premier Daniel Andrews urged those wanting to help out during the crisis to give money rather than food or other goods.

“I don’t want to appear harsh in any way, but we don’t need any more clothes, food, trucks on our roads, we don’t have the warehouse capacity, the people or the time to sort through,” Mr Andrews told reporters on Sunday evening.

“We are very grateful … but it’s really important that those donations stop because they are diverting resources away from firefighting and providing support to those who are in real need.”

I know it’s tough to watch this all unfold & feel helpless. I know a lot of people want to get stuck in & lend a hand. But it’s important to remember that the emergency relief effort is being run by experienced organisations – & they don’t have space to sort or store donations.

He said “what we do need though and what those families need most” is monetary donations.

“That way money can be given to the families and they can make decisions that are much more flexible and local.”

Mr Andrews pointed to the newly-established Victorian Bushfire Appeal, set up in partnership with Bendigo Bank and The Salvation Army, as a way to help communities.

He said donations can be made online or at any Bendigo Bank branch.

The Victorian Bushfire Appeal will be overseen by Pat McNamara – former Victorian Deputy Premier and Minister for Police and Emergency Services. Donations can be made online at https://t.co/KfN146bhYJ or in any branch of the Bendigo Bank.

A number of celebrities including Australian actor Nicole Kidman and US singer Pink have made donations to firefighters and Australian comedian Celeste Barber has so far helped raise $25 million.

NSW RFS South Coast division made the same request on Sunday night after reaching capacity for donated food and goods.

Our South Coast team has been overwhelmed by generous donations from the community, however we’ve now reached capacity for donated food and goods. You can still support firefighters and affected communities in other ways. Here’s a few ways you can help: https://t.co/4bv2h9x56i pic.twitter.com/MixwKbhaIl

Four Victorians were still unaccounted for in fire-affected areas, where the danger is far from over despite cooler conditions.

He also confirmed that while smoky conditions made rescue operations challenging, more people had been airlifted out of Mallacoota on Sunday.

Sixty-one people had left the town on Sunday morning on Australian Defence Force helicopters and a ship, and another 350 had indicated they wanted to leave. A further 400 still remained by the coast. 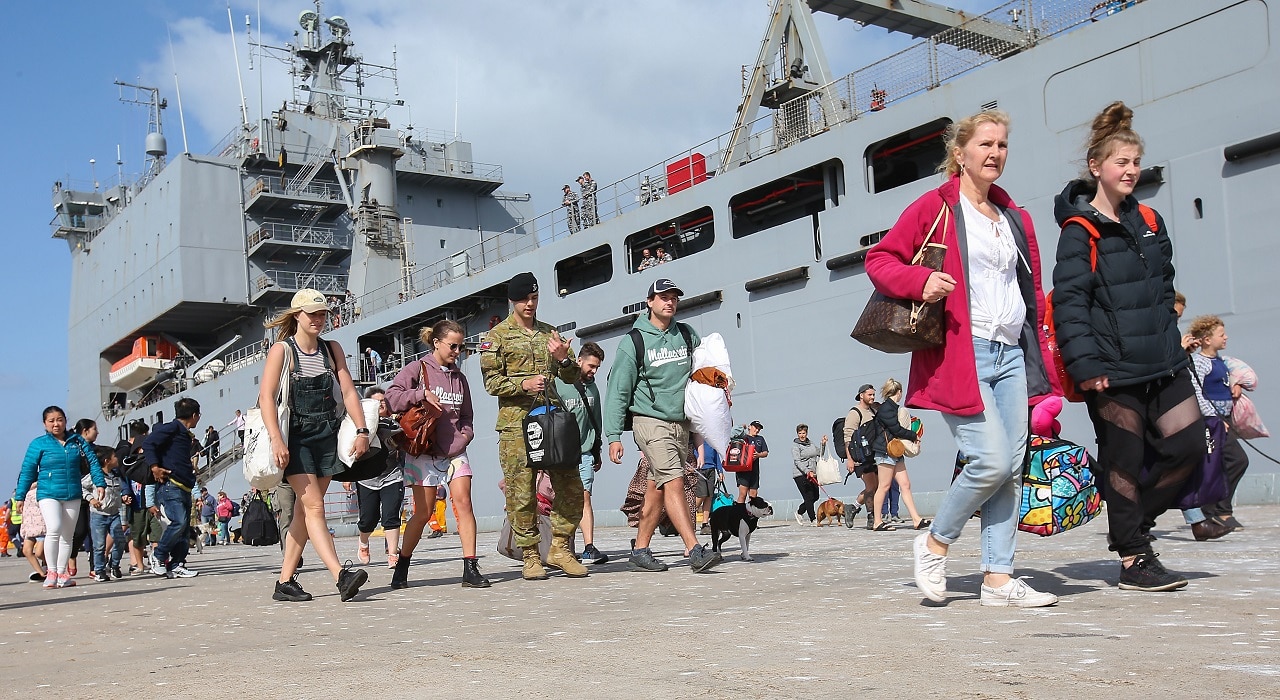 Evacuees from Mallacoota arrive on the navy ship HMAS Choules at the port of Hastings, Victoria.

Cooler conditions and light rain on Sunday gave crews fighting the deadly blazes in the state’s east and northeast some respite, as 18 communities remain cut off and significant property losses loom.

Emergency Management Commissioner Andrew Crisp confirmed that more than a million hectares had been burnt by late Sunday afternoon, 800,000 of them in East Gippsland alone.

Authorities are yet to obtain a clear picture of losses but concede they will be “significant”. Victorian Premier Daniel Andrews talks to the media on Friday.

Mr Andrews confirmed the government will match the amount contributed during the Black Saturday tragedy in February 2009, pledging $2 million.

Despite conditions providing some relief, Emergency Management Commissioner Andrew Crisp urged Victorians to remain vigilant, saying the weather will start to warm up on Thursday and Friday.

“What we are seeing with our weather, is yes, it is milder, it’s more moderate, there has actually been some rain. But in terms of people thinking that this rain is going to put the fires out, that’s not the case,” Mr Crisp said.

“There has been such a drought, particularly in the East Gippsland area, we know these fires are with us for a long time.”

A state of disaster remains in place for Victoria throughout next week.