Skip to content
Uncategorized
A
meteorite is a an object from space that survives a trip through the atmosphere and falls on the Earth’s surface. The meteorite that crashed into Earth over 790,000 years ago was 2 kilometers (1.2 miles) wide, and the impact was so great that debris was flung across Asia, Australia, and Antarctica.

The first clues leading to the impact site came from small, pebble-like glassy objects called tektites. Scientists believe tektites formed from Earth material that melted upon meteorite impact and were thrown into our atmosphere, before falling back to the ground.

“Their existence means that the impacting meteorite was so large and its velocity so fast that it was able to melt the rocks that it hit,” Professor Kerry Sieh, principal investigator with the
Earth Observatory of Singapore and one of the paper’s authors, told CNN.
Tektites between 750,000 to 35.5 million years old have been found across the planet in areas called strewn fields. These strewn fields are found on every continent except Antarctica, according to the
Jackson School Museum of Earth History at the University of Texas at Austin. 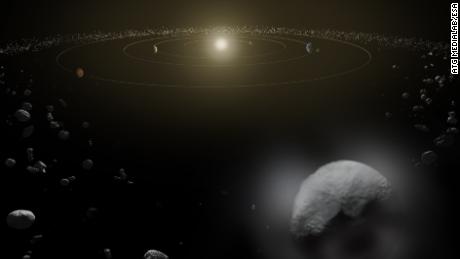 Scientists have largely been able to determine the source crater for tektites, with the exception of one — the Australasian field. It extends all the way from southern China to south Australia, and is the largest known tektite field, covering about 10% of the earth’s surface.

“There have been many, many attempts to find the impact site and many suggestions, ranging from northern Cambodia, to central Laos, and even southern China, and from eastern Thailand to offshore Vietnam,” Sieh said.

“But our study is the first to put together so many lines of evidence, ranging from the chemical nature of the tektites to their physical characteristics, and from gravity measurements to measurements of the age of lavas that could bury the crater.”

Based on the scientists’ calculations, the hidden impact crater that produced the vast Australasian field of strewn tektites is about 13 kilometers (8 miles) wide and 17 kilometers (11 miles) long.

But more still has to be done to confirm the theory.

Scientists will next need to “drill down a few hundred meters to see if the rocks below the lavas are indeed the rocks you’d expect at an impact site — that is, lots of evidence for melting and shattering,” Sieh said.