Samsung introduced the Galaxy Tab S6 with Wi-Fi and 4G support back in August, but it recently confirmed a 5G variant is on the way.

Today, an image of the specs sheet leaked, and if it is real and not manipulated, then were looking at a device that will be entirely the same both on the outside and the inside only with the addition of a Snapdragon X50 modem. 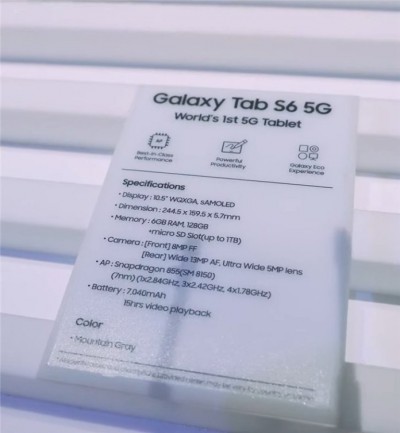 The Galaxy Tab S6 is powered by the Snapdragon 855 chipset. It has two RAM options, with one of them on the leaked image – 6/128 GB (the other is 8/256 GB, but it is limited to certain markets). There are two cameras on the back – a regular 13 MP shooter, coupled with an ultrawide-angle 5 MP snapper.

When the new slate arrives, it will be the first 5G tablet in the world. Expectations are that South Korea will get it first, as Samsung has strong sales in its local market and the 5G deployment is advancing rapidly. The United States and Europe should follow soon.

Since Samsung is not doing too hot in China, so it is highly unlikely the Galaxy Tab S6 5G will appear there, despite being the biggest 5G market right now.