Sue Kersey finished chemotherapy three months ago, but on New Year’s Eve found herself facing another battle as she defended her home in the Nerringillah Valley on the NSW South Coast from “raining fire”.

The home survived, but she said coming face to face with Australia’s bushfire emergency was harder than beating cancer.

“It took us five days to prepare our house, we cleaned the gutters, we got the pump up from the dam, because there is no water in the dam, put it in the tank, we raked five metres around the house, more in some cases, and we got ready,” she told SBS News from the Sydney Town Hall, where NSW Police estimated 30,000 people gathered on Friday evening to protest the government’s response to the bushfire crisis.

“The government did nothing.” 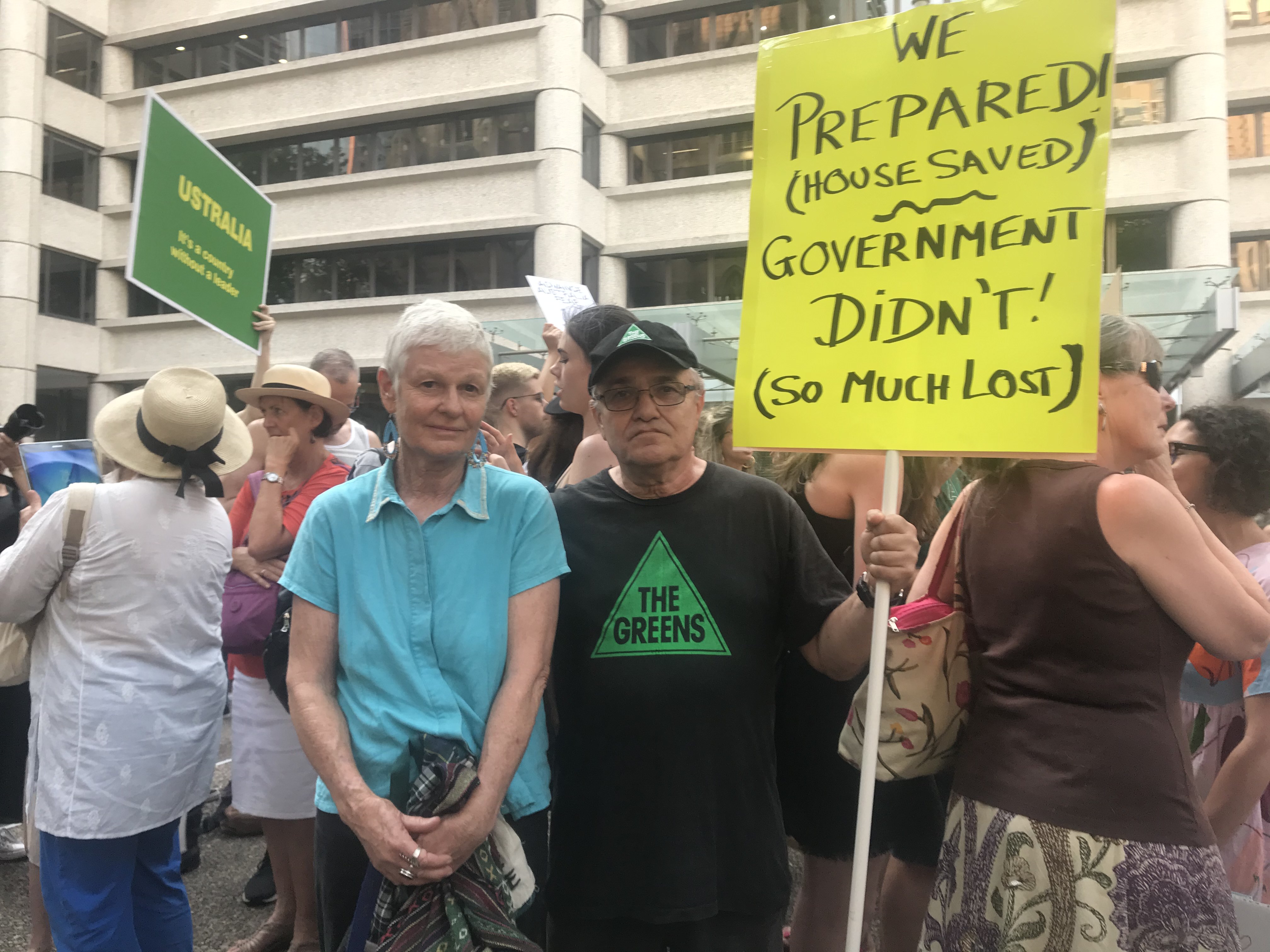 Sue Kersey and Peter Winkler from the Nerringillah Valley near Bendalong on the NSW South Coast almost lost their house during the New Year’s Eve fires.

Sue and her partner Peter Winkler had travelled almost five hours to be at the protest, organised by Uni Students for Climate Action and Extinction Rebellion, but it was the people who couldn’t make it that drove them to be there.

“Two of our friends are now in Concord Hospital suffering from severe burns, they may make it, they may not make it,” Peter said.

“Our friend’s houses were burnt to the ground, 300 metres away from our house.”

Earlier this week, Prime Minister Scott Morrison announced a $2 billion bushfire recovery fund and immediate payments from a pool of $60 million to be given to local councils in fire-affected areas.

The Morrison government has also acknowledged climate change as a major factor in bushfires and Australia’s hot summer.

“But let me be clear about this, climate change is a global challenge. Australia is playing our role as part of this challenge,” Mr Morrison told reporters last year.

But Grahem Jones, 77, doesn’t believe the government is doing enough. “I’m here to support this protest action against lack of action by our leaders on climate change,” he said. Grahem Jones, 77, from Coogee wants more people from his generation to listen to the lessens of the school strikers.

While it’s getting harder for him to attend protests because he is “getting too frail”, Grahem, who lives in Coogee, said the student climate movement reminded him of university protests during the 1960s.

“To see young people on the street leading protests back in those days wasn’t that common,” he said.

“Now we’ve got school students actually organising themselves and going on strike, which just wasn’t done in my youth.”

He urged fellow members of his generation to get out and support the young people leading the charge.

“[We] need to take the lessons we are learning from them – because they’ve educated themselves, a lot of the young people, about the issues whereas my generation, I think, we might be clinging on a little bit to our security blanket,” he said. Jola Jones, 34, is six and a half months pregnant and worried about the future for her unborn baby.

Grahem was at the protest with his daughter, Jola Jones, who is six-and-a-half months pregnant.

“Being an emerging mother I’m really concerned about the future for this child and we all need to be acting in whatever way we can to bring to light how important this earth is,” she said.

The 34-year-old said she had been forced to spend a lot of time indoors due to the bushfire smoke that has blanketed Sydney and the uncertainty over whether it could be harmful to her baby.

“Being pregnant and obviously in the headspace of wanting to protect my child, it’s made everything feel very on edge and very real,” she said. Gulligan, who attended the Sydney protest with his two-year-old daughter, and AJ, who is an organiser for Extinction Rebellion.

“I’ve had to wear a mask, I’ve had to spend a lot of time indoors, and there’s not a lot of information about how it [the smoke] is actually affecting pregnant women.”

Tempe resident Gilligan, who brought his two-year-old daughter to the rally, also said he was there to fight for a safer future for his child.

“It’s quite frightening to think she might not have the future that I hoped for her to have if this goes on the way it is,” he said. 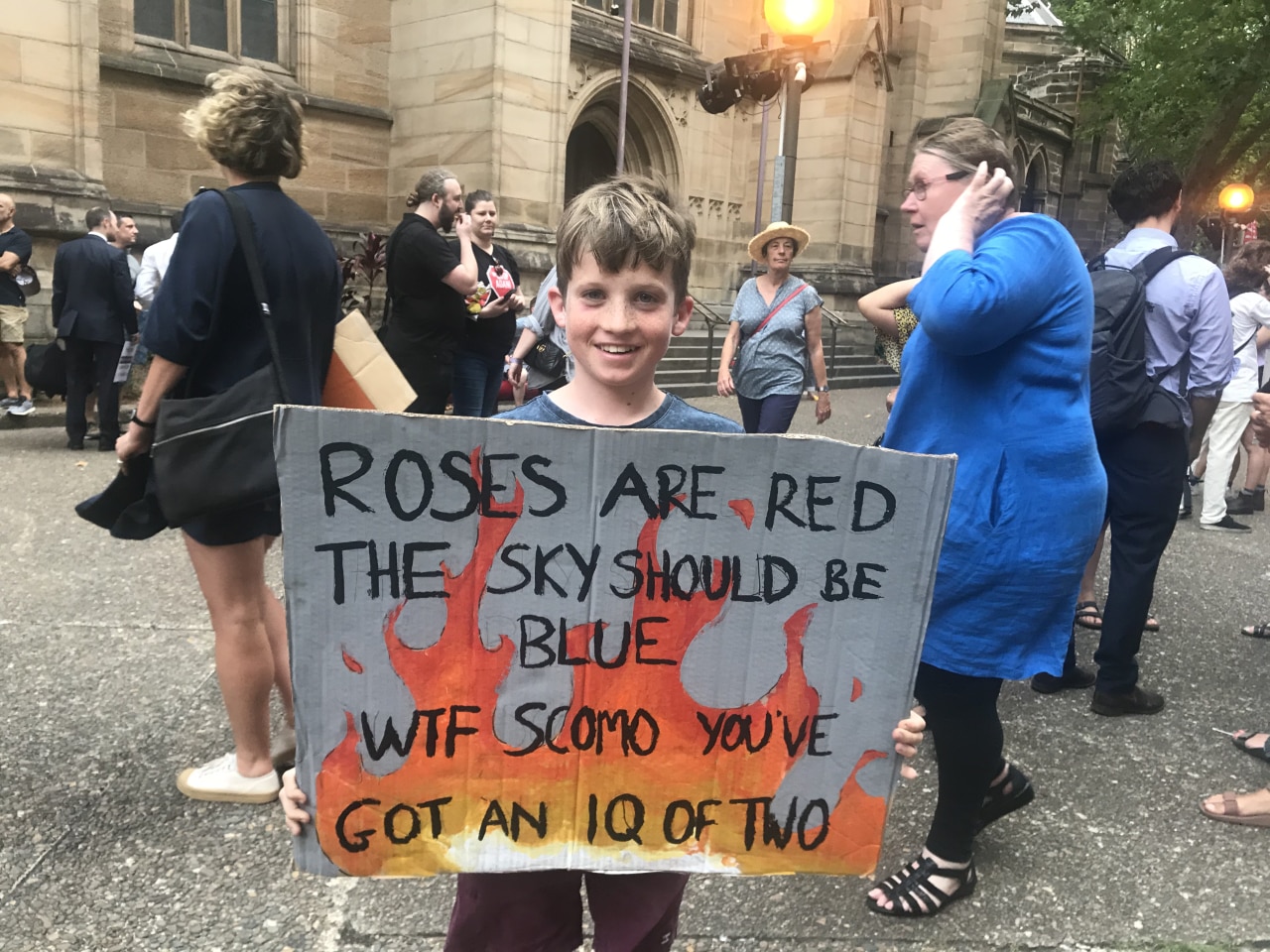 “It’s past the point of no return. If I hadn’t of gone [to the protest] I would have felt really bad. I did it for my daughter, I did it for the country and everyone else who hasn’t been able to get here.”

Among the adults worried for the future for the younger generation was 11-year-old Sonny, who said he felt “very sad and really bad for all the people and animals that have got their houses and habitats burnt”.

He also had a clear message for Australia’s leaders: “I want them to know that they need to make a change.”