Phoenix was one of 147 who were arrested, according to Deadline, along with actor and Charlie Sheen’s father, Martin.

The star has been vocal about his passion for the environment, particularly earlier this week when he took home the Golden Globe for Best Performance by an Actor in a Drama Film.

Taking the stage, Phoenix used the opportunity to encourage the audience to take action on climate change.

“It’s really nice that so many people have sent their well wishes to Australia, but we have to do more than that. Hopefully, we can be unified and actually make some changes,” he said.

“Sometimes we have to take that responsibility on ourselves and make changes and sacrifices in our own lives,” he added. “We don’t have to take private jets to Palm Springs for the awards.”

It’s been revealed Phoenix was behind the award organisers decision to serve a vegan menu for the first time in history, with the actor describing the effort as a “bold move” that sends a “powerful message”.

Following the awards ceremony, fashion designer Stella McCartney took to Twitter to announce that in an effort to reduce waste, the actor would be wearing the same tuxedo throughout awards season.

“This man is a winner… wearing custom Stella because he chooses to make choices for the future of the planet,” McCartney wrote alongside a picture of the star holding his statuette.

“He has also chosen to wear this same tux for the entire award season to reduce waste. I am proud to join forces with you… x Stella.”

Unfortunately, many Twitter users were left unimpressed by the announcement, with one commenting, “I’ve had the same dinner jacket since 1993 and no-one has ever told me I’m a climate hero.” 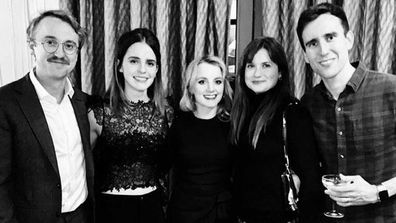 TV and movie cast reunions: Nostalgic photos to give you all the feels