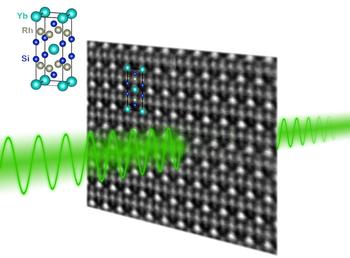 Terahertz radiation is used to analyze the material.

For years, a new synthesis method has been developed at TU Wien (Vienna) to unlock the secrets of “strange metals”. Now a breakthrough has been achieved.

Superconductors allow electrical current to flow without any resistance – but only below a certain critical temperature. Many materials have to be cooled down to almost absolute zero, while some materials keep their superconducting properties up to much higher temperatures. How this “high-temperature superconductivity” works and how it is possible to develop new materials that are superconductors even at normal room temperature is still one of the great mysteries of modern physics.

The key to success could be research on “strange metals”. These are special materials whose electrical resistance shows a very unusual temperature behaviour. This phenomenon is closely related to superconductivity: many classes of high-temperature superconductors exhibit this “strange metal” behavior. Now there has been a major breakthrough: a research team from the TU Wien (Vienna, Austria) and Rice University (Houston, Texas) has developed a new process that allows extremely thin layers of such materials to be produced and then optically analyzed. In this way, important data about these materials are obtained that cannot be measured otherwise, which may lead to the development of better materials and new theories of high-temperature superconductivity.

Strange Metals as the Key to Superconductivity

“Already in 1987, the Nobel Prize in Physics was awarded for the discovery of high-temperature superconductivity, but even today our understanding of this phenomenon is still poor”, says Prof. Silke Bühler-Paschen from the Institute of Solid State Physics at Vienna University of Technology. “However, we know that strange metals are closely related to this technologically important class of superconductors.” Above their critical temperature, high-temperature superconductors show a relationship between temperature and resistance that is completely different from that of ordinary metals. “In contrast to simple metals such as copper or gold, the electrical resistance in strange metals does not appear to be caused by the thermal motion of the atoms, but by certain quantum fluctuations,” says Bühler-Paschen.

To confirm this assumption and to find out more about the nature of quantum fluctuations, not only the temperature dependence of the resistance, but also its frequency dependence must be investigated. The best way to do this is irradiating the material with light in the appropriate frequency range.

A material made of ytterbium, rhodium and silicon (YbRh2Si2), which is known for its particularly pronounced “strange metal” behaviour, was selected for the investigations. To study this material, radiation in the terahertz range is required.

In the clean room laboratories at TU Wien, a new complex molecular beam epitaxy process was developed to produce thin layers of this material: “Ytterbium, rhodium and silicon are evaporated in precisely the right ratio. Atom by atom, these materials impinge on a substrate,” says Maxwell Andrews (Institute for Solid State Electronics, TU Vienna). “If all parameters are set correctly, YbRh2Si2 grows in atomic layers. By choosing the right duration of the growth process, you can achieve exactly the desired layer thickness.”

“The decisive breakthrough was finding a perfectly fitting substrate on which to apply these layers – namely germanium,” says Lukas Prochaska, one of the three leading doctoral students in the team. “The crystal structure of germanium fits geometrically perfectly the arrangement of the Ytterbium atoms. This allowed us to grow thin films of excellent quality.”

Understanding the Movement of Charge Carriers

PhD student Xinwei Li in the Kono group at Rice University then performed challenging high-precision tetahertz measurements on the thin films. The analysis of the data, in which Rice theorist Qimiao Si also played a major role, yielded decisive new evidence: “Our assumption that quantum-critical charge fluctuations play an important role has now been confirmed,” says Silke Bühler-Paschen. “We have come full circle here: In 2004, we were able to show that the “strange metal” behavior in this material is accompanied by a sudden change in the charge carrier concentration. At that time, Qimiao Si and I had already recognized the need for dynamical measurements, but the technology to realize them was not available. Now we were finally able to scrutinize and understand this process.”