Samsung is introducing a trio of Galaxy S flagships, and their S20 moniker was all but confirmed at this stage it’s always nice to get official backing. Today two of the phones with code names SM-G980F/DS and SM-G985F/DS have been certified for use in Thailand by the local NBTC organization with the names Galaxy S20 and Galaxy S20+. 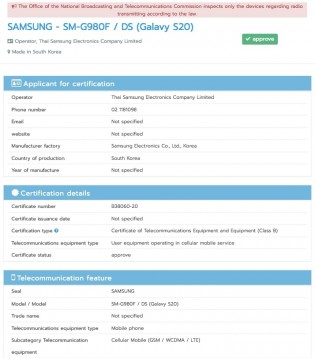 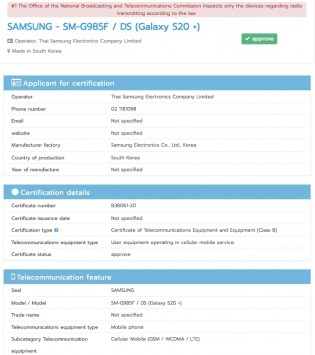 The model numbers are in line with previous flagships, and the letter F in the end usually is used for the international units that are not carrier-locked. The DS add-on means Dual-SIM, but not all phones come with the ability to host two cards simultaneously.

Interestingly enough, one of the phones is actually named Galavy S20, but that’s clearly a typo. The devices are filed by Samsung Thailand, but the certification says they are manufactured in South Korea. Sadly, the NBTC does not reveal any actual specs, but we expect to see the Galaxy S20 and Galaxy S20+ with Infinity-O displays, 120 Hz refresh rate of the screen and redesigned camera setup.