Four people in NSW and two on the Gold Coast are being tested for the deadly new coronavirus spreading from China as the global death toll rose to 26 with 844 confirmed cases.

A NSW Health spokesperson said four people were being tested at undisclosed hospital locations on Friday.

This marks a dramatic increase on Thursday when only one person was being tested.

In Queensland, two people have been quarantined and are undergoing tests today, while four others have been tested and cleared, Queensland’s Chief Health Officer Jeannette Young said on Friday. 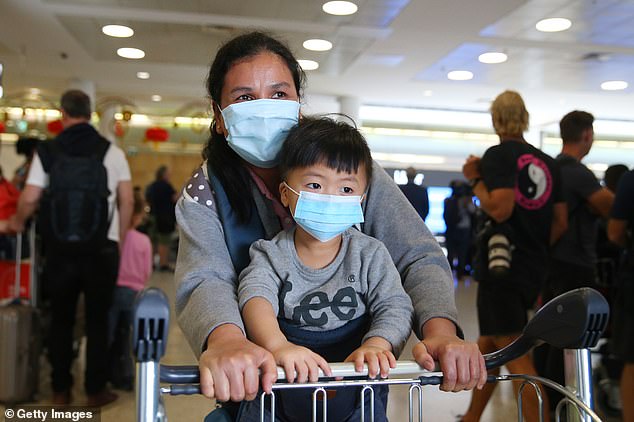 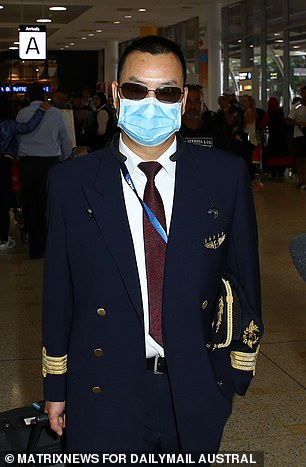 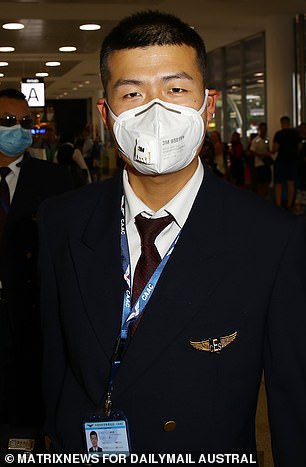 Australia’s chief medical officer Brendan Murphy said on Friday that of the 844 confirmed cases, 14 were found outside of China.

In Australia, several patients were being tested for the virus every day, Dr Murphy said.

‘Should we get a positive case in Australia, we are extremely well-prepared to isolate and manage them,’ he said.

Laboratories are now able to get a test result good enough to act on within a day.

State and territory health authorities are tasked with investigating anyone suspected of having the Wuhan coronavirus, and each state has an isolation facility.

The first cases of the deadly virus were reported in Wuhan, China, on December 31 last year where the it is believed to have originated in snakes.

In under a month it has killed 26 people, infected 844 and spread to at least eight countries: Thailand, Taiwan, South Korea, Japan, Vietnam, Singapore, Saudi Arabia and the United States.

Of the 26 people who died, 24 were in Wuhan, China, where the outbreak started.

China has now expanded its quarantine lockdown beyond Wuhan to neighbouring Huanggang city and cities in Hubei province which borders Beijing.

There are risks that people not yet showing symptoms may enter Australia from other locations or may already be here.

WHAT CAN YOU DO?

The WHO recommends a combination of hand and respiratory hygiene:

– Frequent hand-washing with soap and water, or use an alcohol-based hand sanitiser

– Avoid close contact with anyone who has a fever and cough

– If you have a fever or cough, or difficulty breathing, seek medical attention and tell the doctor of your travel history. Wear a face mask to avoid spreading infected droplets when you cough and sneeze

– If you visit a live market in a place where people have had the Wuhan coronavirus, avoid contact with animals or surfaces they’ve touched

NSW Chief Health Officer Dr Kerry Chant said there may be more cases to investigate, as the global death toll from the disease hits 18, and China puts cities neighbouring Wuhan – the epicentre of the virus – in quarantine.

‘We are able to rapidly undertake testing of cases that come to our attention and either exclude or confirm those cases in a very short time frame,’ Dr Chant said on Thursday.

Experts fear the new Wuhan coronavirus, officially known as 2019-nCoV, may already be in Australia even though no-one in the country has been officially diagnosed.

In an interview with Daily Mail Australia on Thursday morning, Dr Raina McIntyre, professor of global biosecurity at UNSW, said: ‘It is possible that someone who is incubating the infection but is not yet ill is in the country.

‘People can be incubating the disease and not have fever when they enter the country.’

It comes after hundreds of passengers today arrived in Australia from the Chinese city of Wuhan, the epicentre of the new deadly virus which is spreading around the world.

Passengers from China Eastern flight MU749 were wearing masks as they made their way through Sydney Airport’s arrivals hall just before midday on Thursday after a 10-hour night flight on an A332 plane that can hold 234 people. 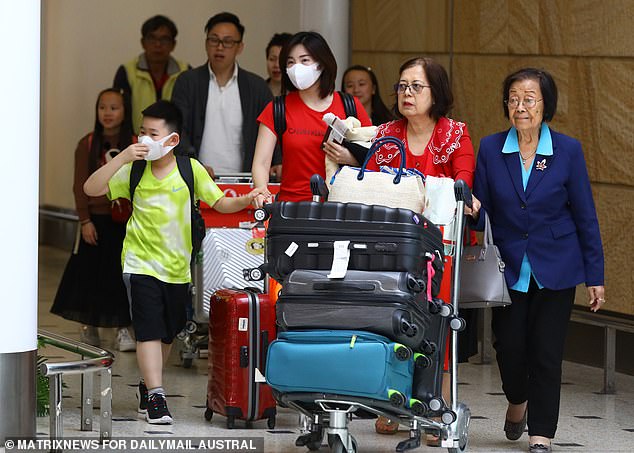 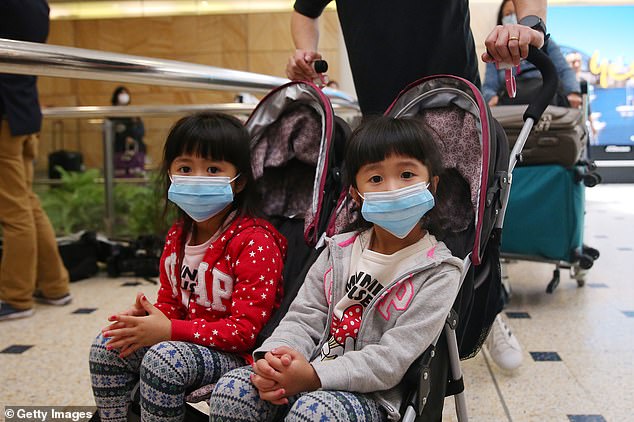 The passengers were screened in China before they boarded and, when their aircraft landed, they were asked by the pilot to declare if they felt unwell. Pictured: Children at Sydney Airport wearing masks

The flight was one of the last to leave the city of 11 million before a quarantine was put in place and all outbound trains and planes were cancelled.

The passengers were screened in China before they boarded and, when their aircraft landed, they were asked by the pilot to declare if they felt unwell.

NSW Health had a team of four nurses and doctors, who wore masks but not full HAZMAT suits, at the airport to interview passengers and ask them if they had any cold-like symptoms before they went through customs. 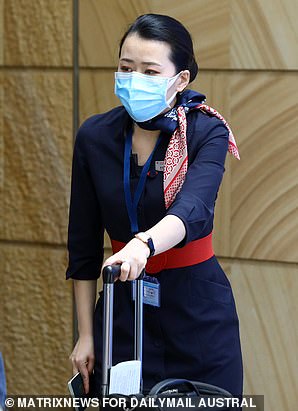 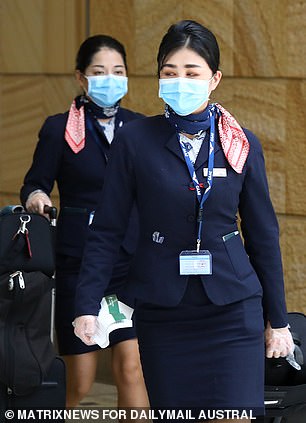 The flight’s cabin crew are pictured walking into arrivals wearing gloves. Workers at the Sydney Airport information desk said they had been told by their bosses not to speak to the media under any circumstances 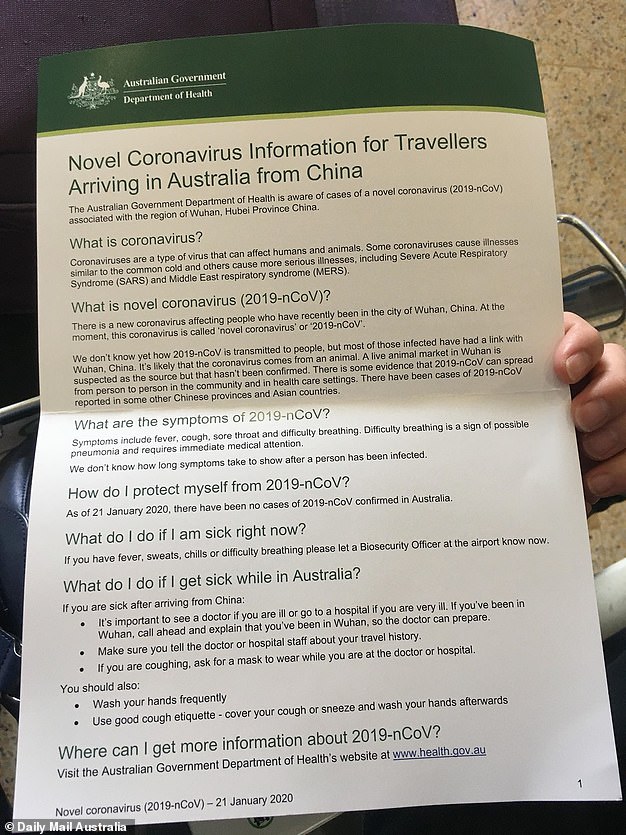 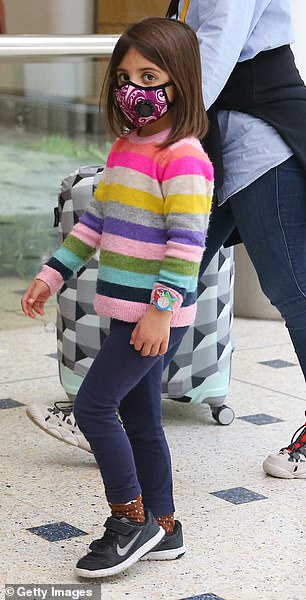 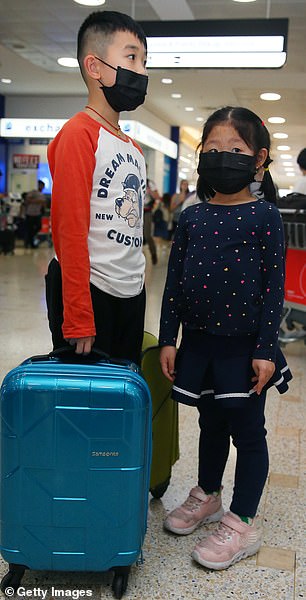 NSW Health had a team of four nurses and doctors, who wore masks but not full HAZMAT suits, at the airport to interview anyone who had cold-like symptoms before they went through customs. Pictured: Children at Sydney Airport wearing masks

The passengers were also screened by thermal imaging to check their temperatures – and given leaflets in English and Mandarin telling them to see a doctor if they suffered sweats, breathing difficulties or chills.

A plan was in place to take any passenger suspected of being infected to Westmead Hospital – but nobody was found to be sick.

The new coronavirus was discovered in Wuhan last month. It is believed to have spread from animals in the city’s market and has already killed 26 people and spread to eight countries.

Doctors on Wednesday said the number of cases around the world may be as high as 10,000. 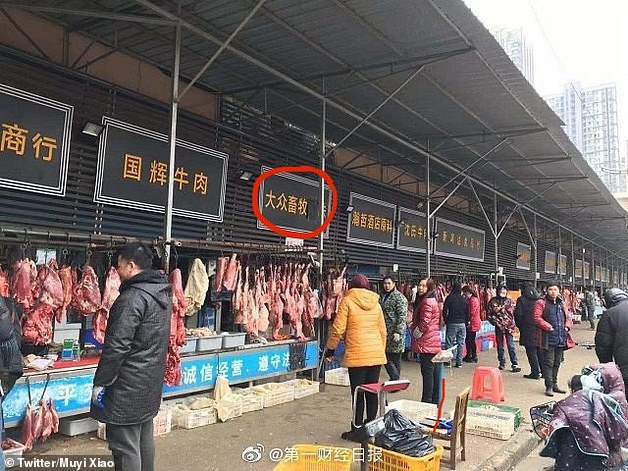 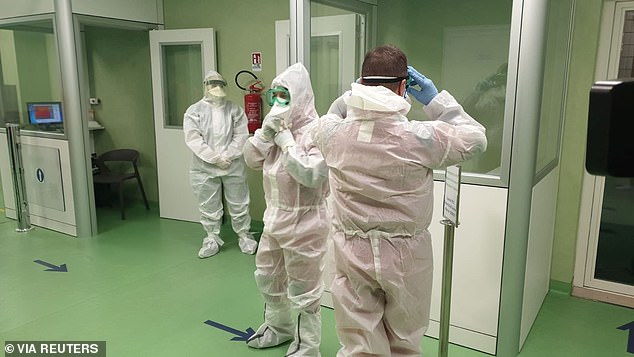 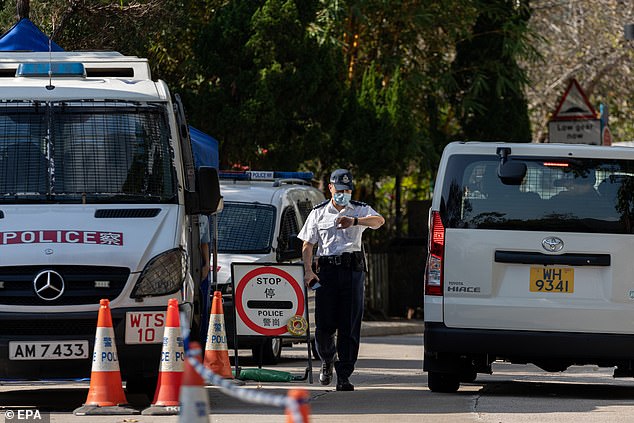 A policeman checks his watch in Hong Kong on Thursday. Fears have been heightened due to Chinese New Year 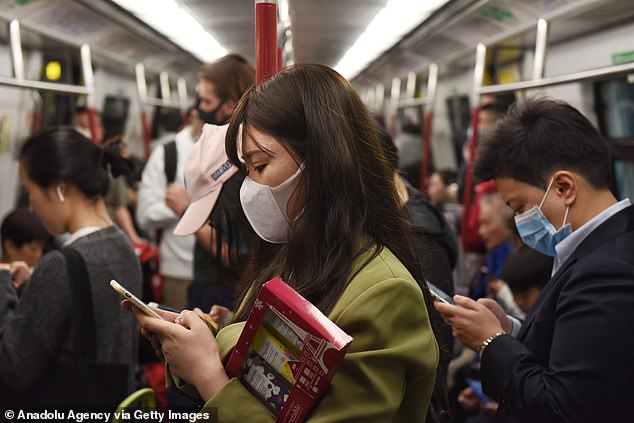 Hong Kong: people travel with surgical masks for fear of the Wuhan coronavirus on Thursday

WHAT DO WE KNOW ABOUT THE CORONAVIRUS OUTBREAK?

The death toll has risen to 26 people with 844 people confirmed to have the Wuhan coronavirus, known as as 2019-nCoV, which has never been seen in humans before.

Most of the cases have occurred in Wuhan, a city in Hubei province home to 11million people. But patients have been diagnosed across China, including in Beijing and Shanghai.

The coronavirus, which is from the same family as SARS, has also spread to South Korea, Thailand, Japan and Taiwan.

Chinese officials yesterday confirmed the virus has spread between humans, suggesting it can be passed through coughs and sneezes.

The outbreak is believed to have started late last month among people connected to a seafood market in Wuhan, which has since been shut.

China is entering its busiest travel period due to the Lunar New Year, which sees many people travelling back to their home town or village.

Virologists fear the increased travel that will happen over the holidays will cause a surge in cases. 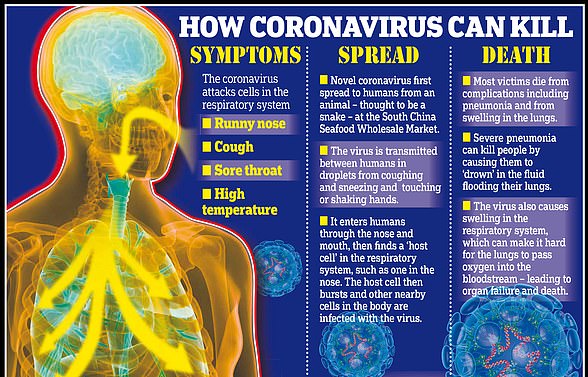 Chinese authorities say 26 people have died and 844 have been infected, air and rail departures from Wuhan are suspended from January 23