NEW YORK — A telescope in Hawaii has produced its first images of the sun, revealing its turbulent gas surface in what scientists called unprecedented detail.

The images show the surface covered with bright cell-like areas, each about the size of Texas, that result from the transporting of heat from the sun’s interior.

The bright spots in the middle of each cell show rising plasma that can reach some 6,000° C (10,800° F), before cooling and descending into the black channels between the grains, according to The Guardian.

The telescope can reveal features as small as 18 miles (30 km) across, according to the National Science Foundation, which released the images Wednesday. 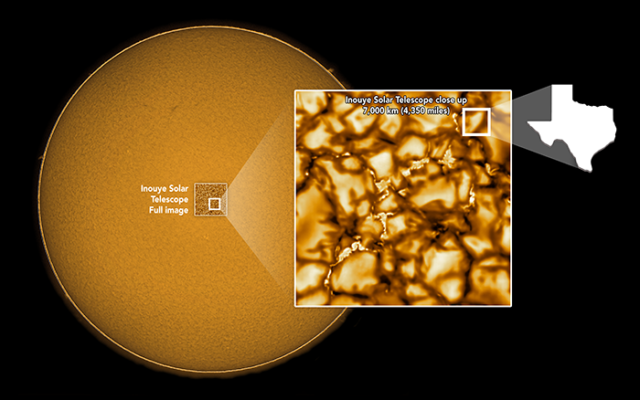 An image released by the National Science Foundation showing the scale of granules seen on the sun’s surface. (NSO/AURA/NSF)

“To unravel the sun’s biggest mysteries, we have to not only be able to clearly see these tiny structures from 93 million miles away but very precisely measure their magnetic field strength and direction near the surface and trace the field as it extends out into the million-degree corona, the outer atmosphere of the sun,” said Thomas Rimmele, director of the Inouye Solar Telescope.

The telescope, with the largest aperture of any focused on the sun, is on the island of Maui.

To contain the massive amount of heat focused on the telescope,which can distort the image, engineers built seven miles of piping to distribute coolant, fed by a swimming pool’s worth of ice a night, according to The Guardian. 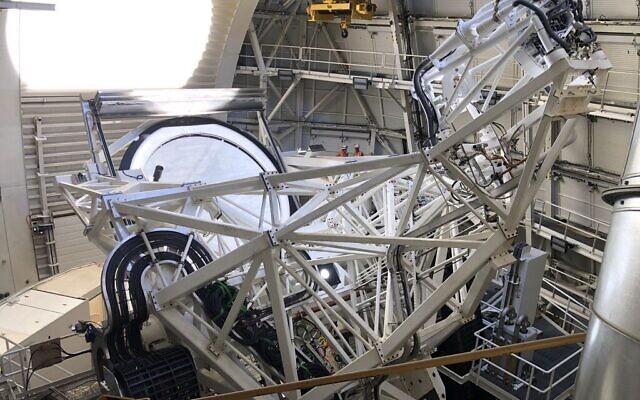 The The Daniel K. Inouye Solar Telescope in Hawaii. (NSO/AURA/NSF))