Dozens of foreigners who may have been exposed to the potentially deadly coronavirus are set to be secretly held in isolation at a hotel near the centre of Sydney, a source close to the operation has revealed.

Staff involved in the Australian Government’s quarantine operation on Christmas Island claim security guards from Serco – the company that deploys staff at the immigration detention – have been sent to a Sydney hotel to oversee the operation.

The source told Daily Mail Australia four Chinese nationals had been held in rooms in isolation at the hotel – which cannot be identified for legal reasons – and that number was predicted to rise to 80 by the end of the week.

‘Anyone who came in contact with or travelled through the contaminated areas could be held,’ the source said. 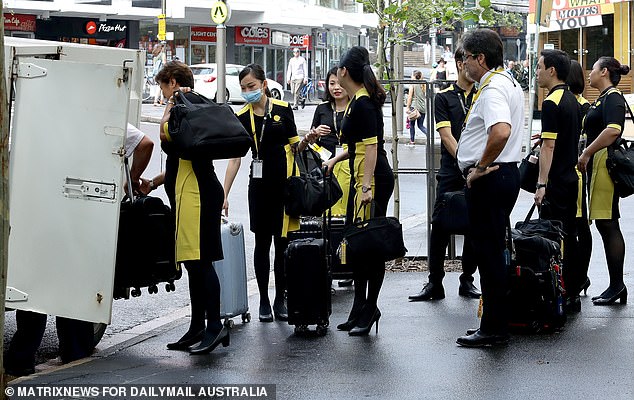 Operation quarantine: Foreigners who may have been exposed to the potentially deadly coronavirus are set to be secretly held in isolation at a hotel in Sydney, sources reveal. Pictured: Airline staff heading back to Sydney Airport. Daily Mail Australia does not suggest these people were held in isolation 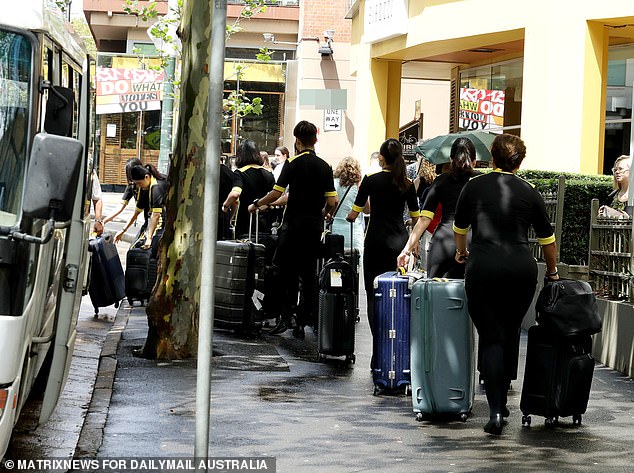 Hotel management confirmed to Daily Mail Australia that security company Serco has booked ‘several rooms’ at the hotel, which is popular with airline staff, but denied claims foreigners were already being quarantined inside them

If any of those held in isolation show signs of coronavirus, they will be taken to hospital.

The revelations come as 243 of the approximately 600 Australians stranded in the coronavirus epicentre of Wuhan, in Hubei province, left on a specially-chartered Qantas flight to be taken to Christmas Island for two weeks of quarantine.

The virus has infected more than 17,000 people – including 12 in Australia – and has been declared a global health emergency.

The plane will land at the Learmonth RAAF base in Western Australia just before 5pm AEST, where they will be met by military with military planes to fly them to Christmas Island for two weeks in quarantine.

Hotel management confirmed to Daily Mail Australia that Serco has booked ‘several rooms’ at the hotel, which is popular with airline staff, but denied claims foreigners were already being quarantined inside them.

‘They have hired some rooms, but as far as we’re aware, there is no quarantine situation taking place. In fact, we’re certain the rooms are empty aside from the staff at the moment.

‘They are here. There are some staff that have been here, but there isn’t anybody here who is in quarantine.’ 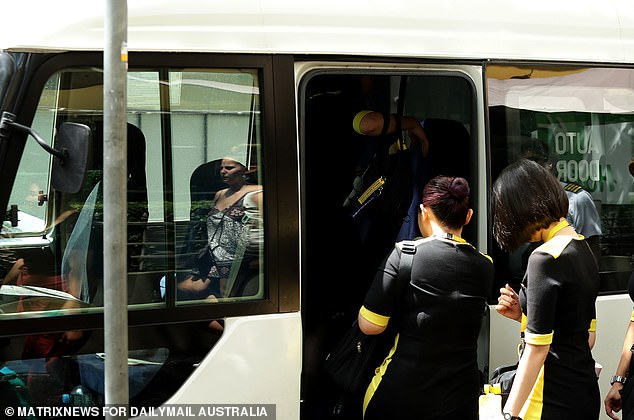 Those in isolation who show signs of coronavirus will be taken to hospital. Daily Mail Australia does not suggest the photographed people are being held in isolation 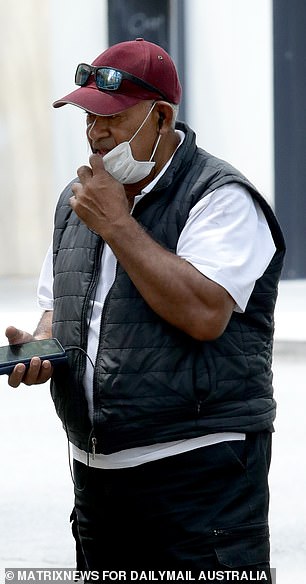 A man wears a mask outside the Sydney hotel on Monday after reports that the hotel was being used to quarantine victims of the coronavirus. Daily Mail Australia does not suggest the photographed people are being held in isolation

The establishment of the hotel isolation unit is part of a wider plan by Australian authorities to stop the spread of the infection, including the introduction of a two-week travel ban from China – the epicentre of the coronavirus outbreak.

A driver for the company said he had an appointment to pick up airline staff at midday – and said all drivers had been told to wear face masks during the trips.

‘We’ve been told to report anything we see,’ he said.

About 12 uniformed hostesses and two men were ushered out of the building by hotel staff and straight on to the shuttle bus.

Their luggage was loaded into the back of the bus quickly.

Some of the airline staff also wore protective face masks for the trip.

One of the hostess’s said they had been staying in the hotel but were about to board a return flight back to Singapore.

‘We’ve been here a while, but we’re flying to Singapore today.’

When Daily Mail Australia asked whether they were being monitored for coronavirus inside the hotel, another air hostess interrupted to say they could not comment.

Within an hour, the same shuttle bus company arrived to do another trip, confirming there were more staff waiting in the building.

A flight attendant from Virgin Australia later told Daily Mail Australia said it was ‘quite scary’ to think quarantine was taking place at the hotel.

‘I hope not. I’m just here because the normal hotel I stay in before a flight was full. That’s quite a scary thought though so I hope there is nobody with it [coronavirus] in there,’ he said.

Hotel guests who were not affiliated with the supposed quarantine quickly sprinted from the confines of the building to waiting cars wearing full face masks.

One woman said she was doing it for her safety, not because she had been exposed to the virus.

Daily Mail Australia has contacted the Department of Home of Affairs for comment.

AUSTRALIANS WITH THE CORONAVIRUS