Google isn’t good at keeping malware out of the Play Store. Even though the company has announced an App Defense Alliance to strengthen its Play Protect Scanner, a few scam apps have once again managed to slip through and are ripping off unsuspecting UK Android users. Some of the applications are currently among the top free apps on the UK Play Store and promise movie streaming at no cost, but sign up users for a subscription service via their phone bill.

The apps have started popping up on the Play Store in January and late December. Many seem to be named with well-known brands in mind, like Plexify HD, Miniplexy, or Plexyvideo, likely playing on the beloved Plex home media server. Most of them have less than 100,000 installs according to the Play Store, but Miniplexy managed to sneak onto more than one million devices.

Among them are four video-focused apps — Plexify HD, Miniplexy, Plexyvideo, and Vidy Videos — that promise to let you watch blockbuster movies for free. There’s also a Wallpaper 4D application that simply grabs its content from the (excellent) photography platform Unsplash, and some Womanly app wants to give you beauty and fashion tips. Most of these are products that the technically savvy would usually steer away from immediately. However, some are currently trending in the UK Play Store’s free chart — Miniplexy is listed as number 3, while Vidly Videos still takes the 14th spot. Close proximity on the list with brands like Instagram, Netflix, and Spotify also lends them a false sense of legitimacy, as any reasonable consumer would assume that apps that have made it this far are well vetted.

Play Store reviewers of Miniplexy and Wallpaper 4D report that upon startup, a pop-up appears that asks them to input their phone number. Hidden from view, there’s a note that the scammers behind the apps will charge £4.50 a week via your mobile contract. You can supposedly stop the rip-off by texting STOP to 87066, a number that is registered to a company called Moonlight Mobile. According to the UK Phone-paid Services Authority, that number does indeed charge £4.50 per week “for unlimited access to the premium features and videos.”

Other apps, like Womanly and Plexify HD, have only been downloaded 100+ times, so there aren’t many reviews yet. Their listings are all published by the same vendor, though, so they likely include similar scams.

While testing the apps on our own devices, we haven’t run into any of the reported scam behavior. We suspect the applications are using Google’s Firebase Remote Config tool, which allows developers to change the functionality and appearance of their app without requiring an app update. This could also have helped the apps enter the Play Store unnoticed since they might not have any clearly malignant code included by default. It’s also possible the developers are using this tool to only target UK users — for now. 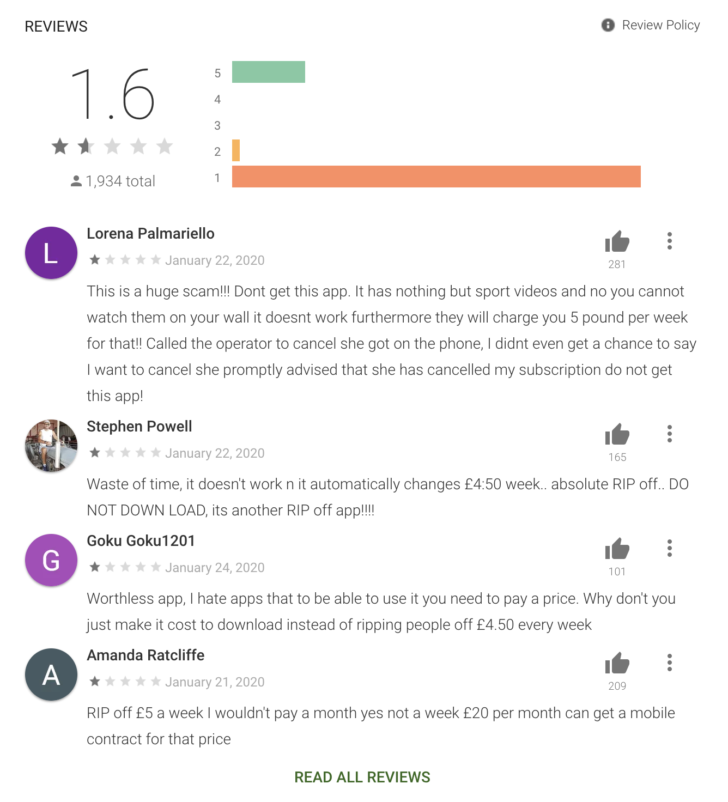 Miniplexy reviews are overwhelmingly negative and full of warnings.

Given the widely reported behavior, we advise you not to install any of the applications on your phone — who knows if they also carry actual malware, too. And as a general piece of advice, if you ever come across an app that promises to offer paid content for free, like Miniplex or Vividly Video, you can usually assume that it hasn’t been built with good intentions in mind, and you should probably steer away from it.

We have reached out to Google for comment, and hope that these apps will soon be removed from the Play Store.

We still haven’t heard back from Google while the scamming apps are continuing to reign freely. In fact, Miniplexy is now the number one app on the UK Play Store, surpassing even TikTok, WhatsApp, and Instagram. 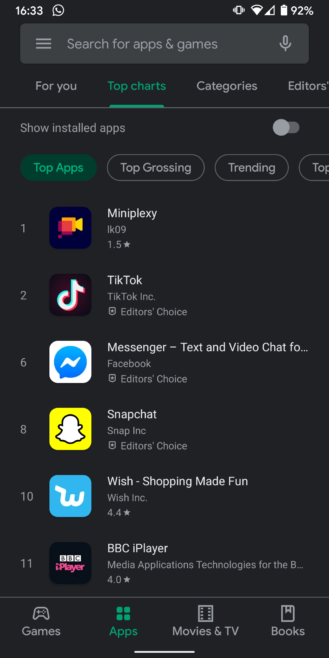