Torrential rainfall currently drenching Australia’s east coast is expected to stick around for the weekend, with flood warnings in place for Queensland and New South Wales.

Northern parts of NSW have been hardest hit, with the main street of Byron Bay turned into a river after flood waters inundated shops and vehicles along the strip.

The localised flooding comes after Byron Bay was hit with 107mm of rain in the past 24 hours, while Cape Byron’s received 254mm during the 21 hours to 6am on Friday – the heaviest daily total since records started in 2002 and higher than any monthly total since March 2017.

There was also 220mm recorded at Gleniffer and Bellingen, 217mm at Kooroowi and 216mm at Thora Post Office.

Sydney is expected to be hit with 100ml of rain today, with the western suburbs tipped for 150ml.

The Bureau of Meteorology has issued a severe weather warning with heavy rainfall and damaging winds expected for the Mid North Coast, Metropolitan, Illawarra and parts of Northern Rivers, Hunter, Central Tablelands and Northern Tablelands.

“A coastal trough near the northern New South Wales coast is bringing increased rainfall to the area,” explained the BoM.

“This trough is expected to deepen and gradually shift southwards, increasing rainfall along the central and southern parts of the coast and adjacent ranges during Friday and over the weekend.

“For some areas, intense rainfall rates and gusty winds are possible with thunderstorm activity or with the formation of mesoscale lows embedded within the coastal trough.”

The location of the heaviest falls will be determined by the movement and strength of the coastal trough, with damaging winds in excess of 90 km/h possible for coastal areas between Gosford and Coffs Harbour today.

“During the weekend, there is potential for heavy rainfall along parts of the southern coast and adjacent ranges as this system shifts its focus southwards,” explained the BoM.

“This situation is being monitored closely and any warnings will be updated if heavy rainfall for these areas becomes likely.”

Showers are still expected to linger around Queensland as the storm moves down the east coast, with several flood warnings in place across the state.

More showers and storms are forecast over the weekend for Queensland, however heavy rainfalls which lashed the state earlier this week are not expected to return until Monday.

“The rainfall should increase again on Sunday as the next upper trough will arrive in the south-east, so Sunday and Monday it may pick up again,” Bureau of Meteorology senior forecaster Gabriel Branescu told nine.com.au. 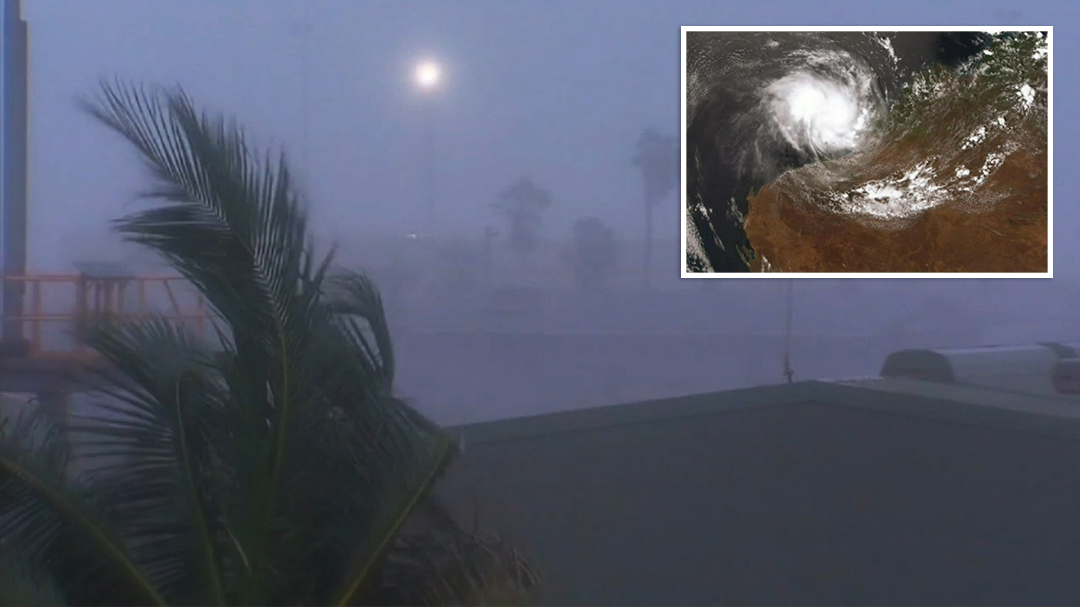 A tropical low off the Kimberley has developed to become Tropical Cyclone Damien, the state’s third tropical cyclone for the year.

The Bureau of Meteorology expects it to reach the Pilbara coast between Port Hedland and Onslow on Saturday as a category-four severe tropical cyclone.

Destructive winds with gusts up to 150km/h may develop on Friday night, increasing further on Saturday near the cyclone centre.

Abnormally high tides could also cause serious flooding at the coast between Dampier and Wallal.

Rainfall totals may exceed 300mm close to the cyclone path, the bureau says.

Residents of towns in the Pilbara between Port Hedland and Mardie, including Karratha and Dampier, are being encouraged to organise emergency supplies such as a first aid kit, torch, portable radio, spare batteries, food and water.

Both Port Hedland and Karratha are home to significant mining and oil and gas operations.

The local ports authority on Thursday said it had initiated stage two of its cyclone response plan for the ports of Ashburton, Dampier and Port Hedland.

“This involves extensive communications with service providers, port users and operators, for any potential port evacuations,” Pilbara Ports Authority said in a statement.

The bureau is also warning that inland parts of southern WA will experience elevated fire danger for the rest of the week as a result of hot and windy conditions.

Perth on Tuesday recorded its hottest day in five years and hottest February day since 1997, with the mercury hitting 42.7C.

ELSEWHERE AROUND THE COUNTRY

Melbourne and Hobart can expect cloudy conditions, with tops of 26C and 16C, respectively.

Darwin and Adelaide will reach 33C and 30C. Both cities will be partly cloudy, with a chance of thunderstorms later in the afternoon.