Rain continues to hamper hopes of the Sydney Sixers and Melbourne Stars squeezing in a game at the SCG, where the BBL final is slated to start at 7:15pm.

The Bureau of Meteorology forecast was for 120-200mm of rain on Saturday in Sydney.

The heavy covers remained in place 30 minutes before the scheduled start of play, when showers were light enough for Test tweaker Nathan Lyon and bare-footed Stars allrounder Marcus Stoinis to emerge from the rooms and inspect the soggy outfield.

Officials remain optimistic that an abridged contest might be on the cards, with a minimum of five overs per innings required to constitute a completed Twenty20 match, but the clock is ticking. 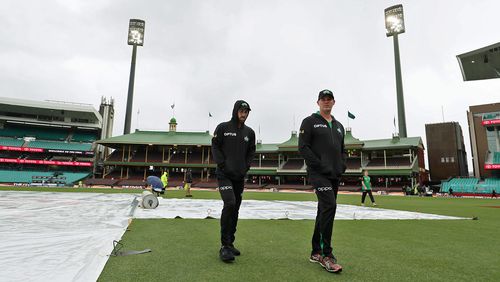 Play would need to start by about 9:20pm for a completed game to be possible.

There is no reserve day in the BBL schedule.

The Sixers will be crowned champions if the clash is abandoned because they are hosting the final.

“They (umpires) are certainly hopeful of getting some sort of game in,” Stars skipper Glenn Maxwell said during Fox Sports’ pre-match program.

“They have to make sure it’s a safe environment for the game to go ahead.

“The last thing you want is a Josh Hazlewood or someone like that going down with an injury because of wet weather. “I know everyone is desperate to get out there and have a game … hopefully, we can get a bit of a break between the showers.”

Every eight minutes of play lost to wet weather will result in the match being reduced by one over per team.