Jenny Tang, 31, grew up in Sydney. Her work in Shanghai has been cancelled due to the coronavirus. She hopes China will learn from what has happened.

“I was born in Xi’an but grew up in Sydney and came to China in 2010 to study in Beijing. When I graduated, I came to Shanghai to work as a film and television producer.

Since the coronavirus outbreak, most of my projects have been postponed or cancelled. 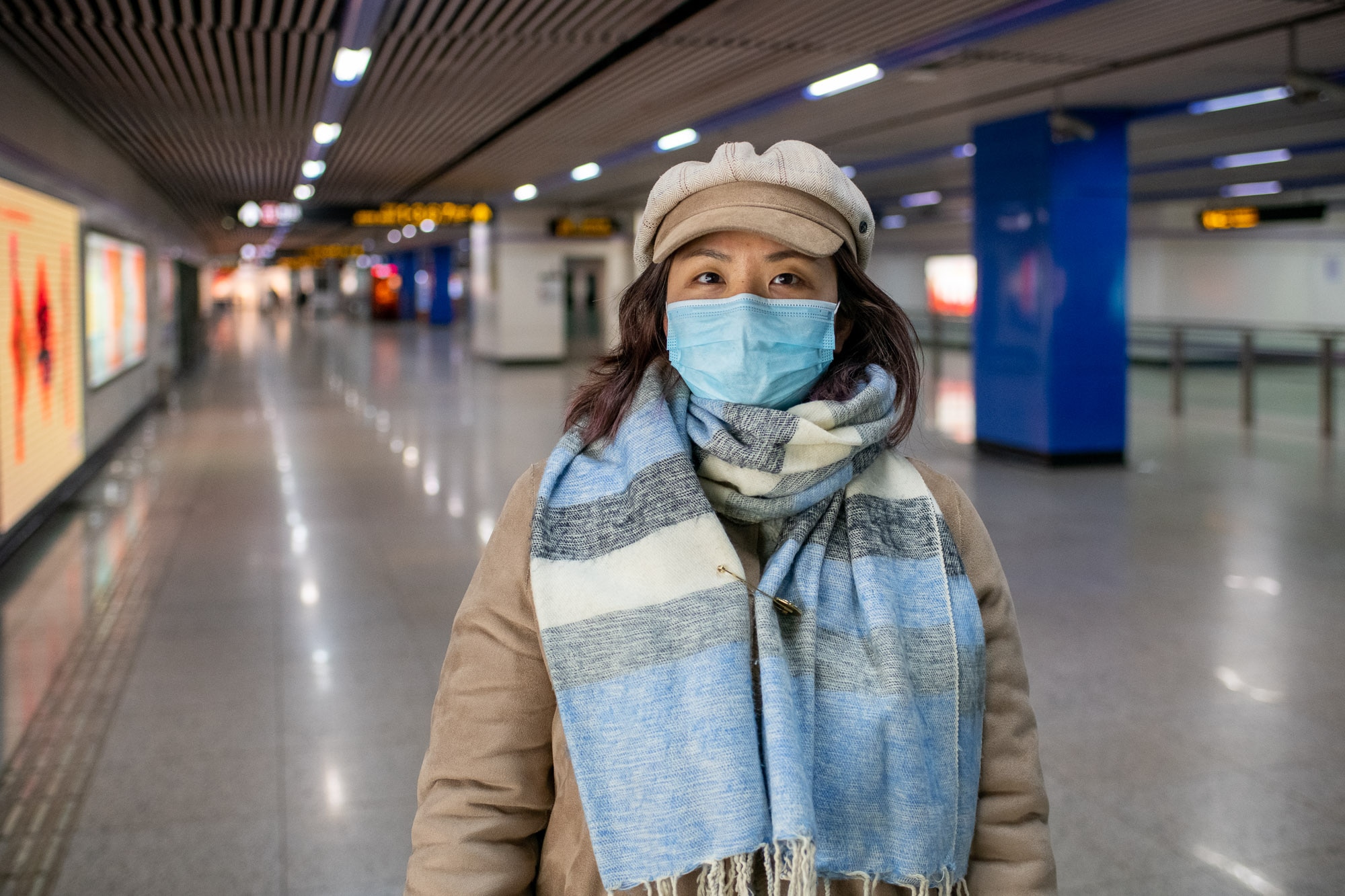 Jenny Tang: “The emptiness reminds more of a small town in Europe. This is really weird for me.”

I know in Shanghai we have it easy compared to Wuhan and Hubei province where people’s movement is much more limited. I was in Henan last week reporting on the coronavirus and our movement was monitored heavily by the local authorities and we were strongly encouraged to leave the province daily. That was pretty stressful.

Last week I met a man who is from Hubei who cannot go back home but he was also prevented from staying in most hotels because of the fear of infection.

The city has certainly changed since the outbreak. Shanghai is a megacity of up to 25 million, where normally there are always people walking around and businesses thriving and bustling. These past few days, despite the good weather, the streets in former French Concession, where I live, are mostly empty except for street cleaners and delivery guys on scooters. It’s quieter and calmer. The emptiness reminds me more of a small town in Europe. This is really weird for me.

I was lucky to have some face masks leftover from a previous project so I started wearing them just as the outbreak started. I wash my hands much more often now, like more than ten times a day, as this is the most common way for coronavirus to spread. I also am taking more supplements like vitamin C to boost my immune system.

Realistically, things will get worse before it gets better, but as the Chinese say, ‘spring will arrive eventually’.

I don’t think life will be ‘normal’ for at least the first quarter of this year. I see China and the world changing and hopefully learning from this outbreak. Maybe China will prohibit wildlife trading. 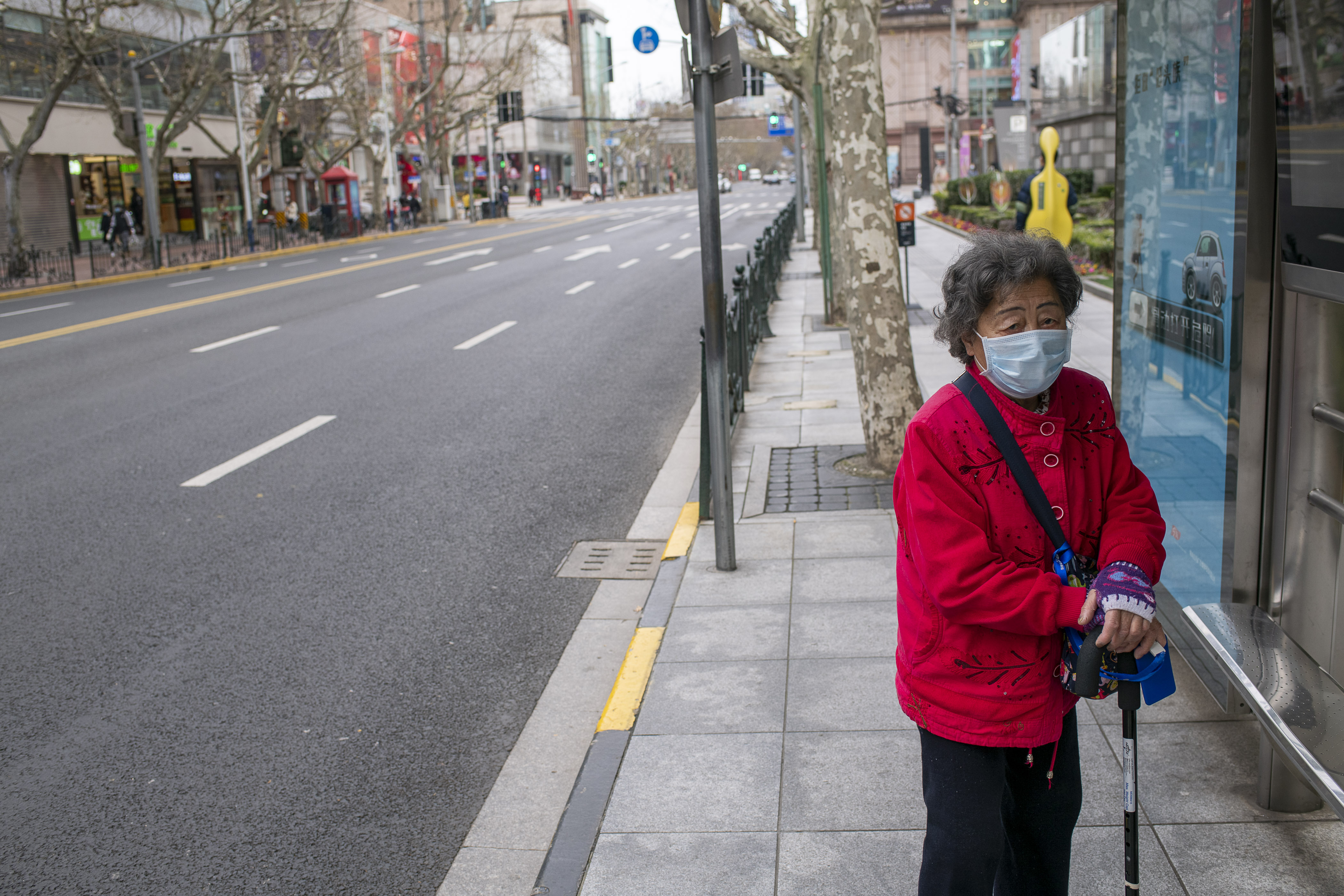 A woman stands alone on a Shanghai street as many stay indoors.

Unfortunately, there are lots of rumours and fake news circulating so naturally, this has caused a lot of panic and paranoia among the public, myself included. I see the fear affecting the locals and expats but the difference is the expats have the option to leave.

I believe the social media and the negativity are more toxic and dangerous than the virus itself.”

Kelley Grimsley, 44, from Victoria, lived in China through the SARS outbreak. Even though the coronavirus death toll has surpassed that of SARS, she believes things will improve.

“I grew up in a beautiful coastal town called Cape Paterson in Victoria. My interest in China began at university when I studied Mandarin as part of a business degree.

I came to China for the first time in 1995 to participate in a language program in Nanjing and returned to China for six months in 2001 when Holden Ltd sent me to for professional development at Shanghai General Motors. It turned into an 18-year adventure that’s still ongoing and I’m currently setting up my own consultancy. 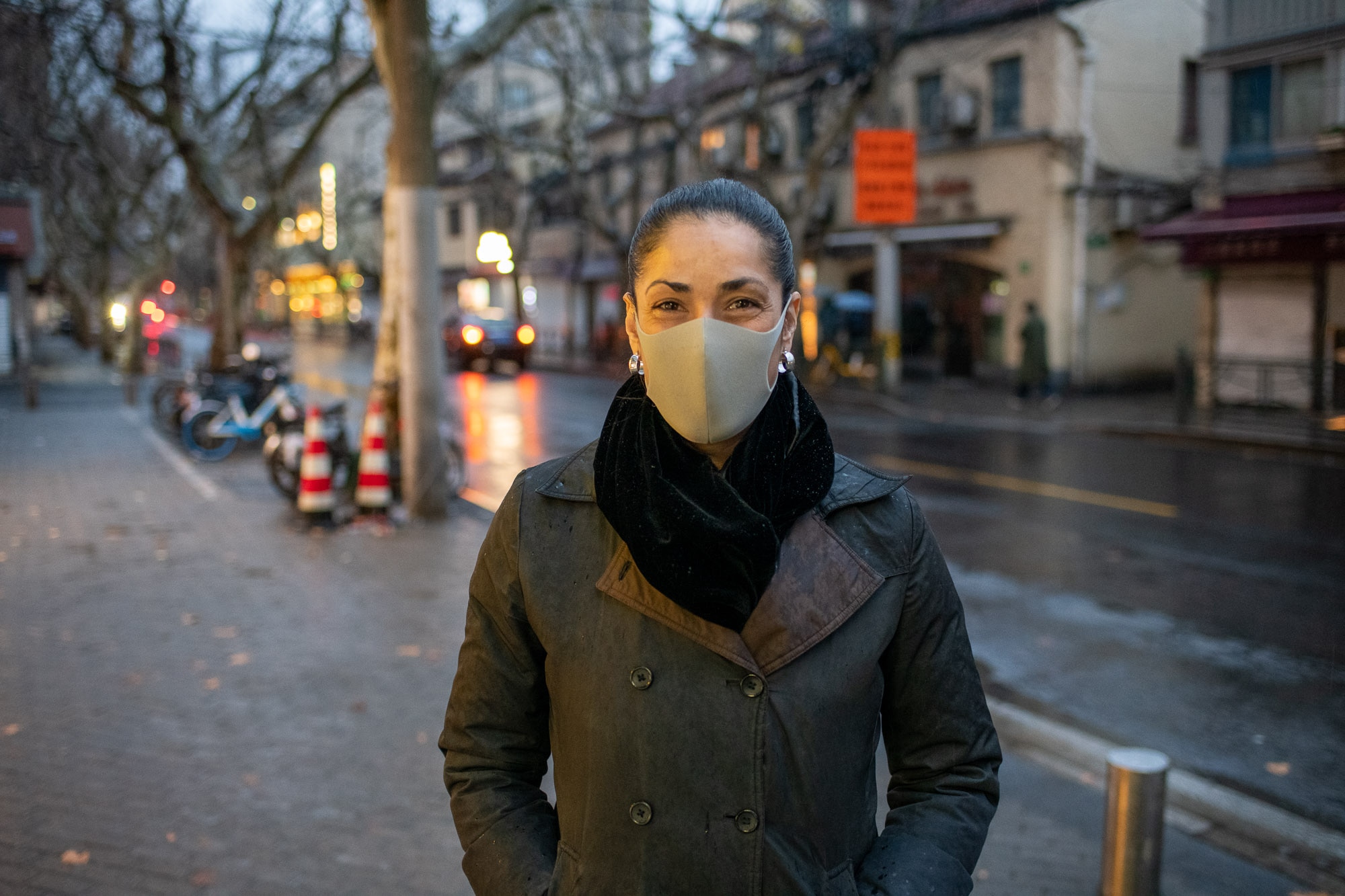 Kellie Grimsley wears a surgical mask in the wake of the ongoing coronavirus outbreak.

As the virus broke out during the Chinese New Year holiday, the city was already like a ghost town. Most of my friends had left town already so my social life was quiet. As it has been extended, this social quietness has continued.

The city has changed in the following ways; the majority of people are wearing masks when they are out in public. Some are even wearing surgical gloves. There are a lot less people out and about. There are no large public gatherings or events being held. Overall, the city has lost its ‘hustle and bustle’.

I started wearing a mask almost two weeks ago. Apart from that, I am using hand sanitiser, which I was already using, and I’m keeping fit. Gyms are closed, but I’m running outside and doing home workouts.

I have not considered leaving China due to coronavirus as I do not feel that I am in any danger. I was in Shanghai during the SARS outbreak and did not feel any danger back then either.

Initially, family and friends were concerned but after better understanding the situation, I think that they feel more at ease. The next few weeks will be key in how it plays out. Personally I feel that things will steadily improve.”

Peter Logan, 59, lives between Melbourne and Shanghai. He has been wearing a facemask since he stepped off the plane in China

“I’m from Sydney, but these days I live in Melbourne and Shanghai, commuting between the two cities. I flew back from Melbourne on 1 February.

Fortunately, I brought a good number of face masks from Australia and started wearing one as soon as I landed. I’m not wearing gloves outside, although this is actually a better precaution than wearing masks. 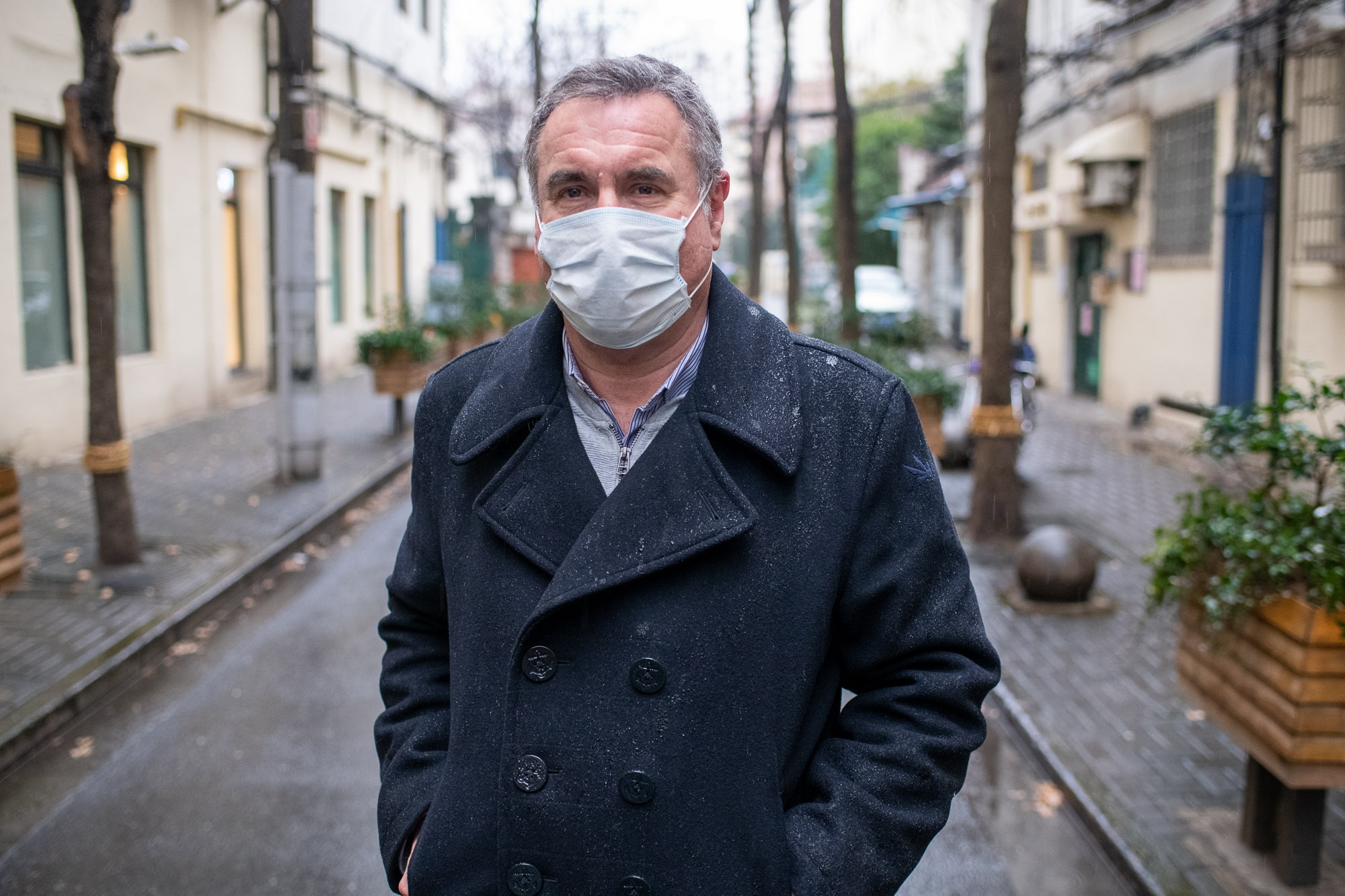 Peter Logan says his office has been closed but he is not panicking.

My wife was very concerned when I returned. There’s a lot of rumour and speculation on Facebook and WeChat. Mainstream media news has been good in reporting facts and it’s easy to sort the truth from fiction.

I have been wearing a mask outside and disinfecting my hands frequently. I don’t have kids in school so that is one less of a worry for me.

I work in Shanghai for an Australian owned Electric Vehicle (EV) start-up, mainly focusing on two-wheeled EVs like bikes and mopeds. Our mission is to replace the 100 million gas-powered bikes in Asia and other countries.

Business-wise we have been impacted by the extension of the Chinese New Year holiday and travel restrictions in and out of the countries.

We expected a lot of new customers after the New Year but that will be slow to wind back up. We aren’t able to open our office, but this understandable given the need to break the cycle of transmission of the virus.

Globally, I don’t see this as a black swan event some economists are suggesting.

One real impact though is my insurance, as a long term travel policy it will not cover me while there is travel advisory warning in place, which Australia has implemented.

There are two types expats here, those who decided to get out as fast as possible due to fear and the unknowns, and those like me and my business partners who judge the risk to be low.

We’re relaxed but vigilant about the situation. The novel coronavirus is, so far, considerably less dangerous than the common winter flu. I’m not concerned unless it starts to mutate into something more harmful.”