A new study, conducted to better understand the origin of the universe, has provided insight into some of the most enduring questions in fundamental physics: How can the Standard Model of particle physics be extended to explain the cosmological excess of matter over antimatter? What is dark matter? And what is the theoretical origin of an unexpected but observed symmetry in the force that binds protons and neutrons together?

In the paper “Axiogenesis,” scheduled to be published in Physical Review Letters on March 17, 2020, researchers Keisuke Harigaya, Member in the School of Natural Sciences at the Institute for Advanced Study, and Raymond T. Co of the University of Michigan, have presented a compelling case in which the quantum chromodynamics (QCD) axion, first theorized in 1977, provides several important answers to these questions.

“We revealed that the rotation of the QCD axion can account for the excess of matter found in the universe,” stated Harigaya. “We named this mechanism axiogenesis.”

Infinitesimally light, the QCD axion – at least one billion times lighter than a proton – is nearly ghost-like. Millions of these particles pass through ordinary matter every second without notice. However, the subatomic level interaction of the QCD axion can still leave detectable signals in experiments with unprecedented sensitivities. While the QCD axion has never been directly detected, this study provides added fuel for experimentalists to hunt down the elusive particle.

Harigaya and Co have reasoned that the QCD axion is capable of filling three missing pieces of the physics jigsaw puzzle simultaneously. First, the QCD axion was originally proposed to explain the so-called strong CP problem – why the strong force, which binds protons and neutrons together, unexpectedly preserves a symmetry called the charge parity (CP) symmetry. The CP symmetry is inferred from the observation that a neutron does not react with an electric field despite its charged constituents.

Second, the QCD axion was found to be a good candidate for dark matter, offering what could be a major breakthrough in understanding the composition of approximately 80 percent of the universe’s mass that has never been directly observed. In their work on the early universe, Harigaya and Co have determined that the QCD axion can also explain the matter-antimatter asymmetry problem.

Today, the universe is filled with matter, indicating that this symmetry must have been broken. Harigaya and Co cite the QCD axion as the culprit. Kinetic energy, resulting from the motion of the QCD axion, produced additional baryons or ordinary matter. This slight tipping of the scale in favor of matter would have had a pronounced cascade effect, paving the way for the universe as it is known today.

Greater understanding of the newly discovered dynamics of the QCD axion could potentially change the expansion history of the universe and thus inform the study of gravitational waves. Future work on this topic could also provide further insight into other enduring questions of fundamental physics, such as the origin of the tiny neutrino mass.

“Since theoretical and experimental particle physicists, astrophysicists, and cosmologists began studying the QCD axion, great progress has been made. We hope that our work further advances these interdisciplinary research efforts,” added Harigaya. 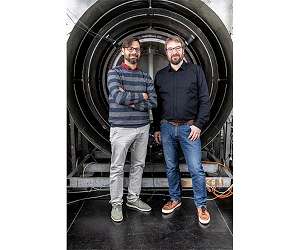 Tracking down the mystery of matter

Researchers at the Paul Scherrer Institute PSI have measured a property of the neutron more precisely than ever before. In the process they found out that the elementary particle has a significantly smaller electric dipole moment than was previously assumed. With that, it has also become less likely that this dipole moment can help to explain the origin of all matter in the universe. The researchers achieved this result using the ultracold neutron source at PSI. They report their results in the journal … read more