The driver, 47-year-old Mohinder Singh, was charged with four counts of culpable driving. Another man, Richard Pusey, has also been charged on multiple indictable offenses, including speeding, failure to render assistance, destruction of evidence and drug possession.

Last Wednesday, Pusey, 41, was speeding down a Melbourne freeway in a Porsche at 140 kilometers per hour (about 87 miles per hour). He was then pulled over by two police officers on the emergency stopping lane, and failed a drug test. Two more officers arrived to help impound the Porsche, according to Victoria state police.

Singh, who was driving a large refrigerated truck, switched from a traffic lane into the stopping lane, crashing into the police vehicle and the Porsche at 100 kph (about 62 mph). The four officers died on the scene and Singh suffered a “medical episode,” but Pusey was not injured, police said.

At a hearing on Friday, Singh’s lawyer Steven Pica said his client remained “distressed and saddened at the tragic consequences of his acts.”

Police detectives told the court that after the crash, Pusey retrieved two phones from the Porsche and filmed the scene, according to
CNN affiliate Nine News.

He then fled the scene and went home, only turning himself in the next day, police said. When he handed his phone over, it had been wiped.

Police had initially suggested that Pusey shared photos of the scene on social media, but detectives at the Friday hearing said there was no evidence of this. 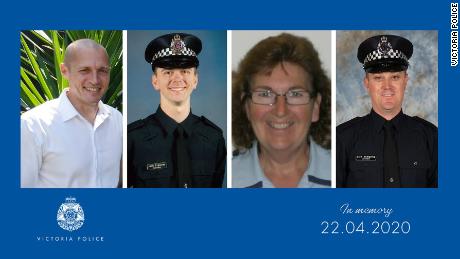 Taylor and King both leave behind spouses and children. Humphris and Prestney were both young new recruits; Prestney graduated the Police Academy last December, and Humphris graduated just last month. This was his first placement with the road policing division.

An online memorial page has received more than 142,000 messages of condolences, and Victoria police have received a flood of calls and emails from well-wishers both within Australia and globally, said Chief Police Commissioner Graham Ashton.

People across Melbourne and the rest of Australia mourned the deaths this past week. The Prime Minister’s office ordered all flags at government buildings to be flown at half-mast on Thursday, with many independent organizations following suit.

The entire city of Melbourne was bathed in blue on Wednesday in tribute to the officers and the police force. People tied blue ribbons and blue balloons outside their homes; blue lights were shone onto the sides of buildings and inside subway stations; LED screens outdoors showed a blue display with the four officers’ names. Footage shot from a plane flying over Melbourne show the city glowing blue from all the lights.

“We stand side by side in our daily response to the Victorian community. And today we stand side by side as we reflect and grieve,” said Ashton in a statement. “The outpouring of community support to date has been truly remarkable and touching and on behalf of Victoria Police, I thank you for this.”