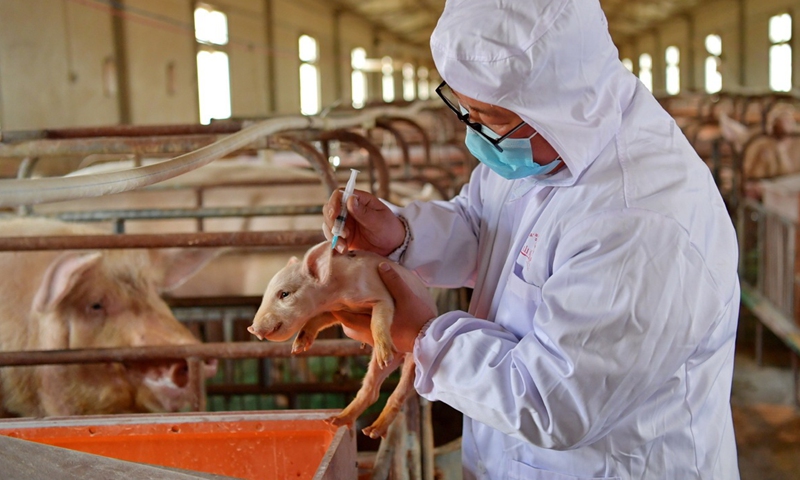 Chinese researchers have issued an early warning over another potential pandemic caused by an influenza virus in pigs, coming after the COVID-19, but disease control experts said the public should not overreact and hog farms have shown no signs of related disease.

Scientists from China Agricultural University, the Chinese Center for Disease Control and Prevention and other institutes detected a pig influenza virus bearing genotype 4 (G4), which is contagious among pigs and has the possibility of jumping to humans, as the G4 virus is able to bind with human cells.

The study was published Monday in the US science journal PNAS.

Researchers collected samples between 2011 and 2018 among pigs in 10 Chinese provinces and regions, and found that the virus was prevalent in pigs since 2016. Some 10.4 percent (35/338) of pig farm workers tested positive for antibodies against the virus, according to the paper.

“Controlling the prevailing G4 EA H1N1 viruses in pigs and close monitoring in human populations, especially workers in the swine industry, should be urgently implemented,” Chinese researchers warned in the paper.

The findings triggered public concern over another pandemic like COVID-19 and whether the virus would exert an impact on the hog industry, which has only recently seen signs of recovery after African swine fever (ASF), which was prevalent in 2018-19.

G4 includes sequences from a virus discovered in birds in Europe and Asia, as well as the one that caused the 2009 H1N1 pandemic, which was a hybrid of human, swine and bird flu viruses.

Despite wide concerns, an expert on veterinary medicine close to the research team who requested anonymity told the Global Times on Tuesday that the new virus is not very different from other swine flu viruses that are prevalent in pigs, and it is preventable.

The new virus, considering it has a similar genetic sequence of the 2009 pig flu virus, has the potential to jump to humans. But the chance of human-to-human transmission is minor, the expert noted.

Previous human infections with G4 were dead-end and did not cause human-to-human transmission, research showed.

Yang Zhanqiu, a Wuhan-based virologist told the Global Times that the paper’s warning about human-to-human transmission is prudent but the public does not need to be overly concerned.

During the swine influenza pandemic in 2009, scientists predicted it would infect over 600 million people worldwide but eventually some 60 million people got infected, media reported.

As a precautionary measure, the expert said slaughterhouses and hog farms should strictly carry out daily sterilization and closely monitor the pigs.

Hog farmers reached by the Global Times on Tuesday said they had so far not been affected by the new swine flu but they are always vigilant toward hog diseases.

“All employees need to be sterilized before entering the farm and the feed sampling is closely monitored,” Li Yunlong, a hog farmer from North China’s Hebei Province, told the Global Times on Tuesday. Li has 10,000 hogs in his farm.

“There has been no large-scale swine flu outbreak in the history of China so I am not too worried about it,” Li said, noting there are no signs of a new swine flu so far in his farm.

Zhou Zhou, a hog farmer from East China’s Jiangsu Province, also said he was not aware of the new swine flu but more worried about a return of ASF.

“Half of the sickened pigs in our farm died last year. Now we disinfect the piggery every day. All workers must wear isolation suits, which are also disinfected daily,” Zhou said.

The Chinese hog industry suffered a blow during the 2018-19 ASF outbreak. ASF is harmless to humans.