Health officials are poring over the results of some 3,000 tests conducted in Melbourne’s locked-down public housing towers to decide whether residents will be allowed to leave.

The Department of Health and Human Services says it will have results from the tests today, when they plan to let residents know what comes next.

Stay up-to-date on the coronavirus outbreak

There have been significant delays on Melbourne’s arterial roads, where police have set up roadblocks to help enforce coronavirus restrictions.

More than five million residents in Greater Melbourne and Mitchell Shire were placed in a Stage Three lockdown at midnight.

ABC Radio presenter Trevor Chappell went through a checkpoint at Avalon, south-west of Melbourne, this morning.

He says the road was chock-a-block leading up to the roadblock:

“I was stopped just before Avalon and, probably about one kilometre before, it took me about 45 minutes to get to where the checkpoint was, sort of stopping and starting,” he said.

“And then got to where the checkpoint was and it had all opened up so it was pretty clear from there on in.”

Good Morning everyone. Just a real quick question. I am a single dad and normally pick up my kids from their mum on Friday night through to Sunday. Can this still happen whilst in Melbourne lockdown? My ex and I get along fine and can work things out but we are just both unsure if this is even allowed during lockdown. Only details online is that of involving court orders etc… Cheers

Hey Steven, I hope you’ve got some indoor, kid-friendly activities ready, because you’re absolutely able to pick up your kids.

Here’s what it says about custody arrangements for people in Melbourne and Mitchell Shire:

“All shared custody arrangements, whether informal or court-ordered can continue as normal.

Bring on the puzzles!

The new stage three lockdowns are particularly hard for families with kids at home during the school holidays, which have been extended for another week.

The playgrounds, like this one at West Melbourne, are now officially closed.

But everyone can still go out for exercise — it’s one of only four reasons people in Melbourne and the Shire of Mitchell are allowed to leave their homes.

All those bikes people purchased during the first lockdown will probably get a good outing and that means Melbourne’s bike paths will be busy once again.

Jetstar passenger says she was tested

Jacinda Fermanis was among the 48 people who disembarked a Jetstar flight from Melbourne to Sydney without being screened.

“We were advised to head to a Summer Hill testing facility, the alternative being a member of NSW Health could come to you,” Ms Fermanis said.

“I went with that option, basically ran through the quarantine measures itself and what to expect, I was offered a swab test which I absolutely took — better safe than sorry.”

NSW Health has blamed the airline for the bungle, saying its staff breached protocols.

Transport Workers Union Secretary, Richard Olsen, says the airline should have had the right measures in place.

Hi DanielleGreat blogging team. I’m just confused why the Tower Community are suggesting, that any of those tested Negative to Coronavirus be quarantined in hotels. Shouldn’t it be the Positive ones. Thanks

You’re bang on there Confused one. Mr Dini was asked to clarify that he and the community wanted residents who tested positive to the virus to go into hotel quarantine with their families, so I’ve tweaked that post to reflect this.

Any more on the tracing of Melbourne patients that got of that Jetstar plane without checks?

Federal Health Minister Greg Hunt was asked about the bungle when he spoke on ABC News Breakfast a short time ago:

“Even though it’s been carried out as a domestic transfer between the states, I instructed my department to immediately approach the states, to work on the procedures.

“I have been reassured that they have not only begun, and either in almost every case, or those still to come, carried out the
contact with the individuals.

“But that NSW has changed its procedures. So, we saw that there was one case here in terms of one flight.

“We have provided Federal oversight immediately, and to NSW’s credit they’ve responded immediately.”

Overseas Aussies asked to be patient

Speaking on ABC News Breakfast, Mr Hunt said the decision on international arrivals was a “difficult” one:

“But we have to work to the safe capacity of each of the states and territories. That’s the fundamental responsibility.

“And for Australians who are coming home now, five months after the virus first started, then obviously each will have their own circumstances.

“And if they do have to wait, we ask them to be patient.”

Australians stuck overseas could be asked to further delay their return home due to the coronavirus outbreak in Melbourne.

Federal Health Minister Greg Hunt said National Cabinet was meeting tomorrow to discuss whether the number of international arrivals into Australia should be reduced.

This comes after Victoria asked overseas flights to be diverted and WA asked for a slowing of arrivals in Perth.

“What the national cabinet is doing is reviewing the total numbers to make sure that the procedures are safe,” Mr Hunt said.

“Seven out of eight states and territories have done an extraordinary job.

Calls for a positive residents to be quarantined

Mr Dini said residents wanted to see a strategic exit plan from the Victorian Government to allow for those who tested positive to go into hotel quarantine with their famlies.

“That’s what the community is asking for.”

He said the buildings were an “incubator” for the disease.

“The Government health advisers have called it basically a vertical cruise ship, so we do not want people who are positive to be in these buildings, because that would obviously mean that more people will get [sick],” Mr Dini said.

“And we do not want to get out of lockdown and go into Stage 3 and then find ourselves with more people coming sick, and so on then obviously that will probably mean we will have to go on another hard lockdown.

The ABC spoke to Ahmed Dini, a resident in one of the public housing towers, a short while ago.

The towers were originally set to be locked down for five days, with residents unable to leave the building.

It’s hoped today will be the last day of the hard lockdown, but it’s unclear what will happen today.

“The information that has been forthcoming is that we do not know when we are going to get out of this lockdown,” Mr Dini said.

“I know that a lot of the testings have happened.

“We’re basically still in lockdown and we’re hoping that there should be some sort of information coming forth about coming out of this.” 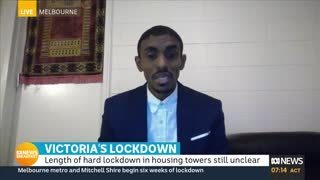 We’re going to kick off with the nine Melbourne public housing towers this morning, where residents are waking up their fifth day of a hard lockdown.

The ABC understands the coronavirus testing of residents has been completed.

“Until we have those results and develop a clear plan to support anyone who tests positive or is a close contact, you will need to remain in your home,” the statement said.

“If you test positive or are a close contact, you will need to continue to remain in your home for longer. This is the same for anyone in Victoria.

“There are people in your building who have COVID. So this is a very real health problem we are all trying to work together to stop.”

Residents were told that support services, including food deliveries and medical care, will continue.

Thanks for joining me today. It’s going to be another big one for news, so there’s not a lot of time for dillying or dallying.

Let’s get stuck into it.