Police have arrested 16 anti-lockdown protesters and handed out 61 fines during an hours-long stand-off with hundreds rallying against the Victoria’s coronavirus restrictions.

The “Freedom Day” protest started at Melbourne’s Shrine of Remembrance at 2pm on Friday, with hundreds shouting “free Victoria” and for Premier Daniel Andrews to be sacked.

Scuffles with police erupted at the shrine, with an AAP photographer reporting that officers used pepper spray on some demonstrators.

Protesters moved on to St Kilda Road and went in different directions – some clashing with police on horseback at the Arts Centre and others ending up surrounded by officers at Kings Way in South Melbourne.

In a statement Friday evening, Victoria Police said it was “extremely disappointed” in the behaviour of a large number of protesters who disregarded the health and safety of the community.

“Police are investigating an incident where several police horses were hit in the face with a flagpole by a man,” the statement said.

“Thankfully the horses were not injured during the assaults.

“An incident where a police van was damaged after being pelted by items thrown by protesters will also be investigated.” 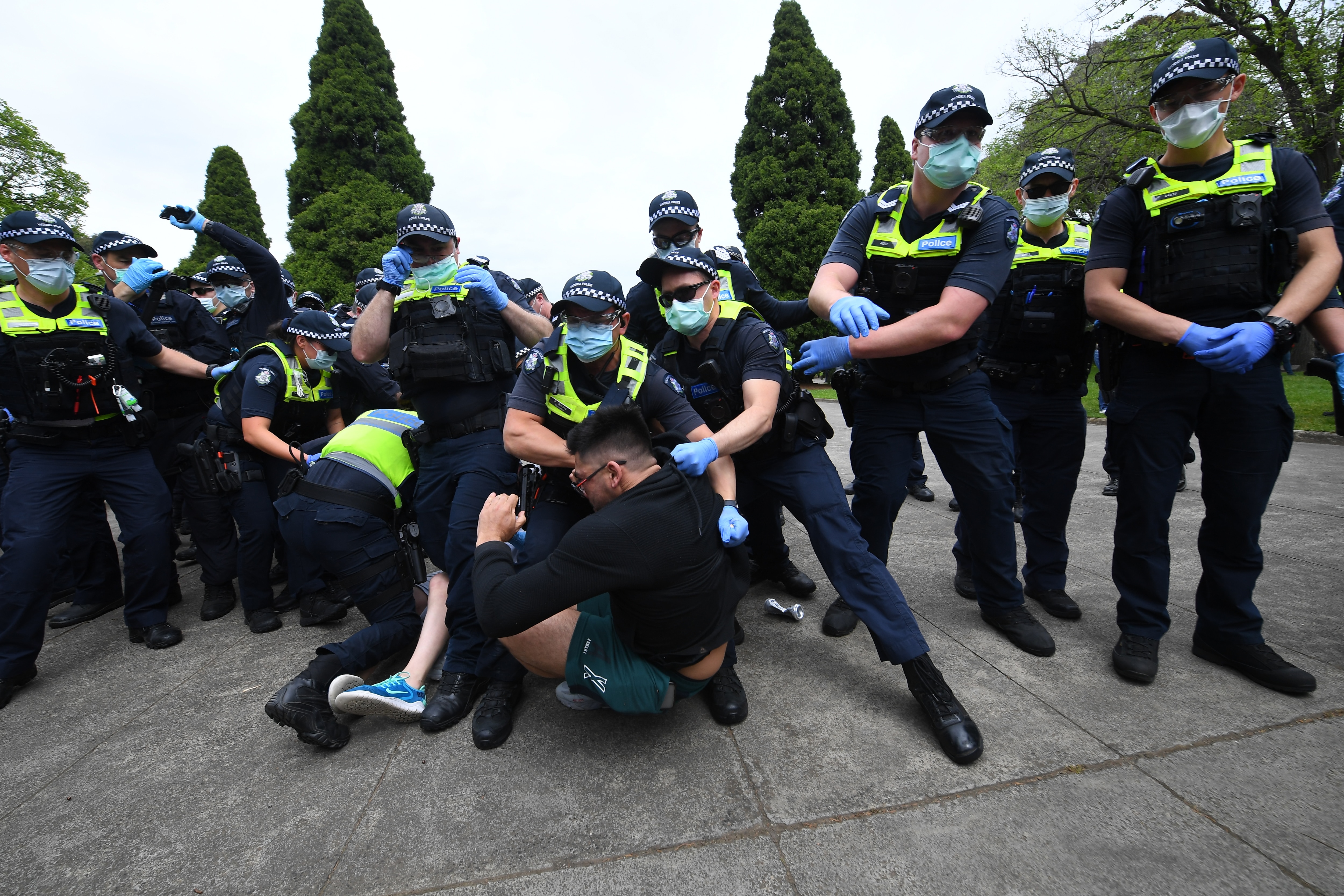 Protesters are seen during an anti-lockdown protest in Melbourne on 23 October.

Three officers were injured during the protest and one was taken to hospital.

“Victoria Police will not accept the selfish behaviour of those who continue to breach the CHO directions,” the statement said.

The 61 penalty notices issued relate to breaches of health directions, such as not wearing a mask, failing to meet public gathering limits and travelling more than 25km from home, assaulting police and failing to state name and address.

An AAP photographer on the scene saw protesters damage a police car, steal a policeman’s hat and let off a flare.

Some protesters wore t-shirts with the slogan “Let Victoria work”, in reference to the shutdowns which remain in force across most industries. An anti-lockdown protest in Melbourne has continued for hours

Many held placards with slogans such as “Media is the virus”, “COVID-19 is a scam” and “Wake up Aussies”.

While lockdown rules have been eased recently, Melburnians can still travel no more than 25km from their homes, and are not permitted to have visitors to their home, unless for care-giving.

People are allowed to gather in groups of no more than 10 people from two households, and must wear masks and socially distance.

There have been regular protests over the last few months but Friday’s rally was the most significant in size and duration. Police used pepper spray amid scuffles with demonstrators at an anti-lockdown protest in Melbourne.

Mr Andrews urged protesters on Friday morning not to attend the Shrine because it was a sacred place for Victorians.

“Protests don’t work against this virus and potentially put at risk all the good work we are doing,” he said.

Opposition leader Michael O’Brien, who is an advocate for easing of restrictions faster than the Victorian government has allowed, urged protesters not to break public health rules.

And he said the Shrine was not the place to protest because it was a place of “reverence” and “sacrifice”.

People in Australia must stay at least 1.5 metres away from others. Check your jurisdiction’s restrictions on gathering limits. If you are experiencing cold or flu symptoms, stay home and arrange a test by calling your doctor or contact the Coronavirus Health Information Hotline on 1800 020 080.

News and information is available in 63 languages at sbs.com.au/coronavirus.