The Senate Judiciary Committee pushed through US President Donald Trump’s conservative pick for the Supreme Court, Amy Coney Barrett, as Democrats boycotted the vote saying it was too close to the 3 November election.

The unanimous vote on Friday, with all Democrats absent, sets the stage for full Senate approval at the beginning of next week on Barrett, who will tilt the high court firmly to the right.

On Wednesday Democrats labelled the nomination process a “sham” that broke former Republican promises to never vote on a Supreme Court nominee so close to a presidential election. 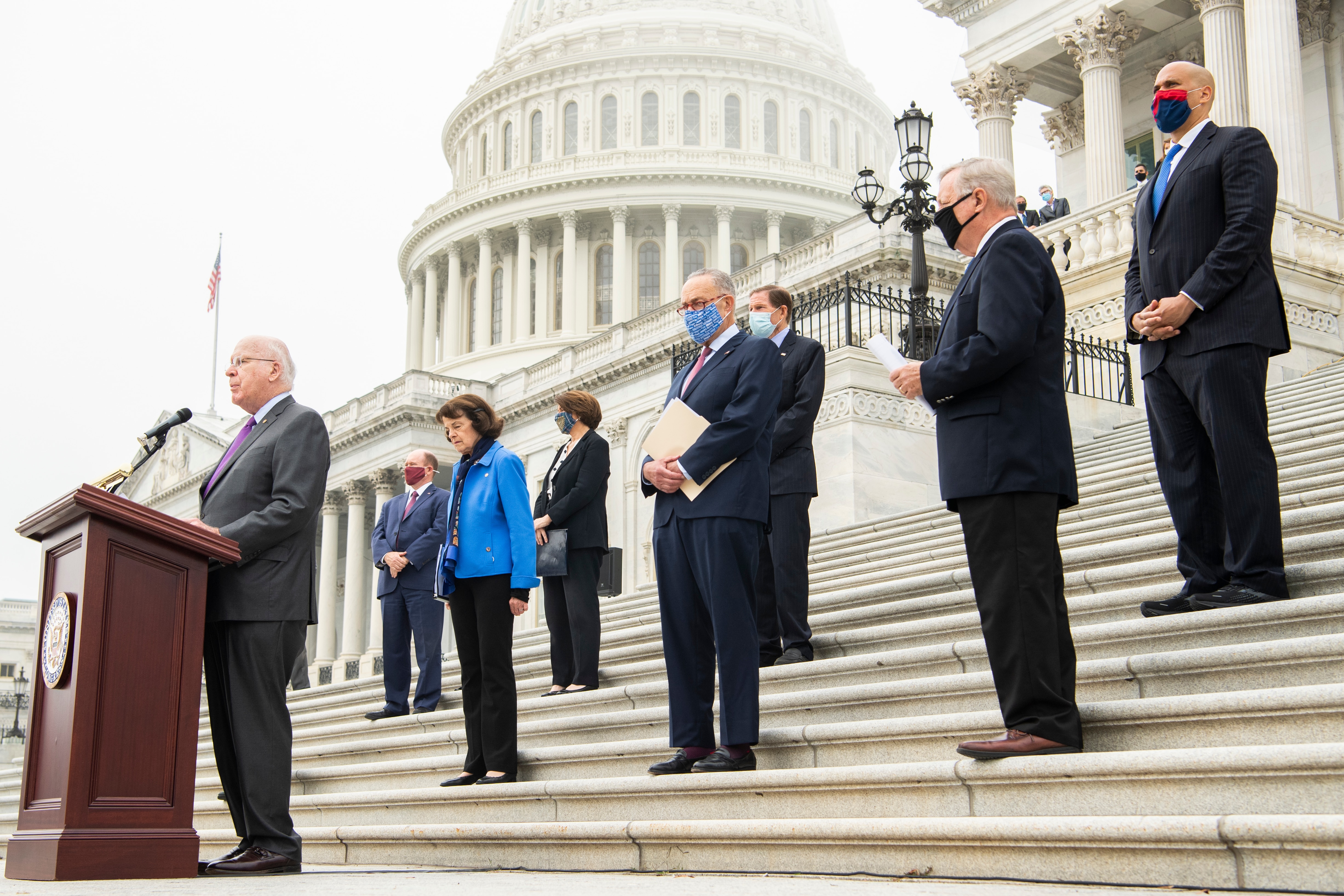 “My Democratic Senate colleagues and I boycotted the Supreme Court nominee committee vote today,” Senator Kamala Harris, a committee member who is the Democratic nominee for vice president, said.

“Let’s be clear: this nomination process is a sham and shows how Republicans will stop at nothing to strip health care from millions of Americans with pre-existing conditions,” she said, referring to Republican efforts to have the Supreme Court strike down a popular national health care program.

But Republican committee chairman Lindsey Graham dismissed their action, and, taking advantage of their absence, moved up the vote by almost four hours.

“That was their choice,” he said before the vote.

“It will be my choice to vote the nominee out of committee. We are not going to allow them to take over the committee.”

Judge Barrett’s nomination will now go to the full Senate for debate and a planned vote on Monday.

With Mr Trump’s Republicans holding a 53-47 majority in the Senate, final approval is near certain, even if two Republican senators say they do not agree with voting on her so close to a national election that polls show Trump could lose.

An appeals court judge and former law professor, Judge Barrett’s approval will give conservatives of 6-3 majority on the nine-member high court that has the potential to end protections for abortion and same-sex marriage rights and rule illegal the Affordable Care Act (ACA) of Trump’s predecessor Barack Obama.

Approval will give Mr Trump a key victory and appeal to his voter base, many of whom consider winning conservative control of the court and banning abortion the primary issues in national politics.

Mr Trump has said he wants a judge who will end abortion rights and help kill the ACA, which that extended health care overage to millions of uninsured Americans.

The court will hear a case on the ACA a week after the 3 November election. 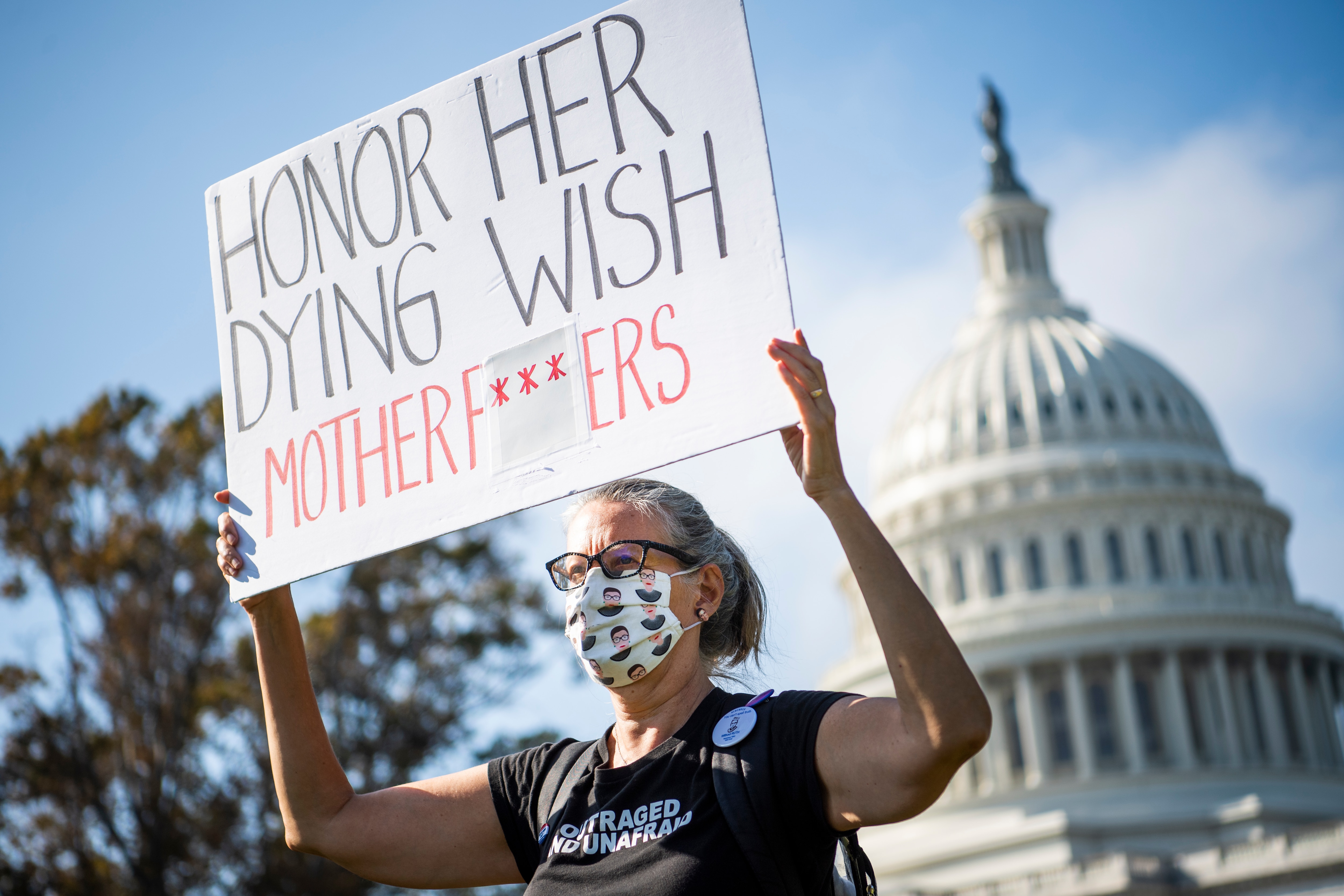 A demonstrator on the East Front lawn of the Capitol on the day of the vote.

A long-time law professor at the University of Notre Dame, and an appeals court judge for the past three years, the 48-year-old Judge Barrett follows a somewhat fundamentalist school of US judicial thought, originalism, and is a devout Catholic.

Over two days of intensive questioning in Judiciary Committee hearings last week, she steadfastly avoided expressing her legal views, saying she would not address theoretical issues, but only judge cases as they come, on their own merits.

“She will take her job on without agenda,” Mr Graham said Thursday. “She understands that judging is not a cause, it is a process.”

In the hearings, Judge Barrett also refused to say if she would recuse herself if, in the days after joining the Supreme Court, she has to review any legal challenge on the results of the election.

Mr Trump has said he wants her in place if the election results are fought up to the high court, as in 2000.

“I certainly hope that all members of the committee have more confidence in my integrity than to think that I would allow myself to be used as a pawn to decide the election for the American people,” she said.